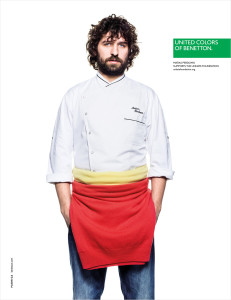 Born in Uruguay, Matias Perdomo follows his family in Argentina, Brazil and Denmark to escape the military dictatorship established in their homeland.

After returning to Uruguay in his teenage years, Matias dropped out of school at the age of 14 to become an apprentice carpenter in his uncle’s atelier. It is only then that the young Matias discovered his passion for cooking after attending a cooking class in his free time, and decided to turn it into his full-time job. His talent and perseverance rewarded him: at the age of 18 he was already managing a team of 40 people as an executive chef in a chain of Italian restaurants.

However, it was only upon his arrival in Italy, at the age of 21, that Matias realised he had yet to learn the basics of the “true” cuisine of the Bel Paese. Thanks to a friend he joined the staff of the now famous Milanese restaurant Al Pont de Fer, whose reins he would take a few years later. While initially the restaurant was catering to a crowd seeking to taste the simple dishes of the Milanese tradition – such as pasta and beans, tripe, risotto – the advent of Matias gave space to original and refined tasting menus. In 2011, the ability to revamp the rustic Milanese osteria menu into a gastronomic selection for gourmet palates earned him a Michelin star.

Four years later, Matias opened his first restaurant in Milan “Contraste”; a place appreciated to such an extent that it is advisable to book well in advance. Building on his success, the unstoppable Matias started 2018 by inaugurating “Exit. Gastranomia Urbana” the new place to be in Milan for foodies, just a stone’s throw from the central Missori underground stop. 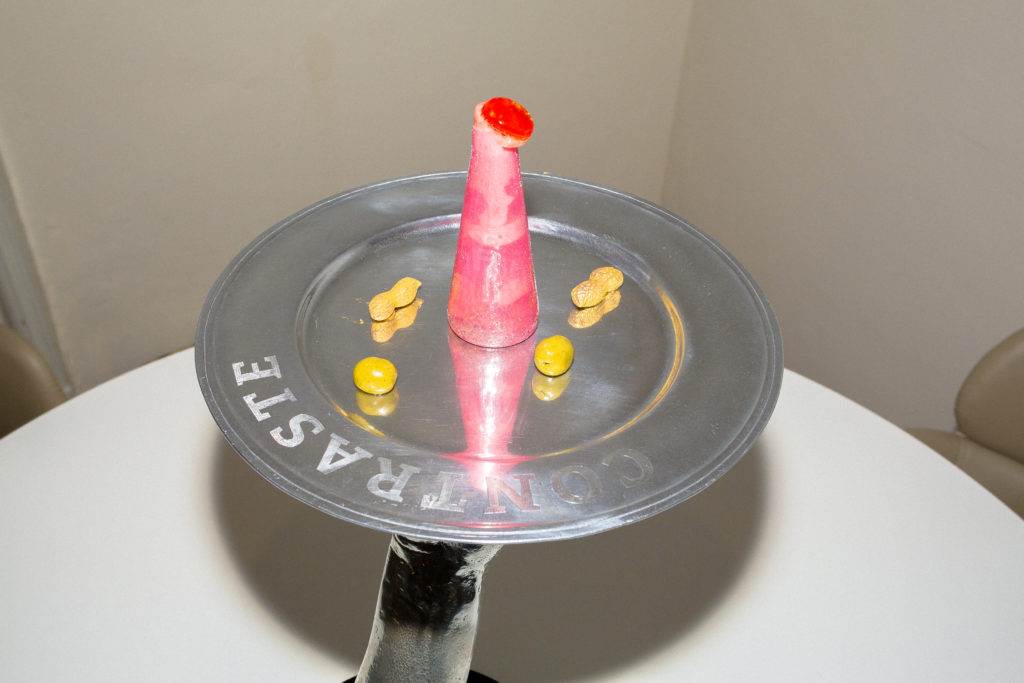 A handsome face framed by a cascade of dark curly hair, brilliant and ruffled like the one of a football player just out of the shower; his blue eyes, a little ‘falling’, confer him a dreamy and vaguely melancholic look, ready to turn into a sparkling one as soon as the topic of cooking is brought up. His smile is open and spontaneous, while his light Spanish accent is set to make every woman’s head turn, in particular those over 40, who are especially sensitive to the charm of Latin Lovers. Matias Perdomo is a truly fine specimen… of a chef. But behind his undeniable “sexiness” lies a child who’s never tired of experimenting, testing himself and pursuing his dream. Passionate about art and often surrounded by his artist friends – Alessandro Ciffo, Matteo Pugliese and Alessandro Busci, to mention just a few – Matias Perdomo is theunder 40 chef to interview… and follow on social media! (instagram: @mpchef) 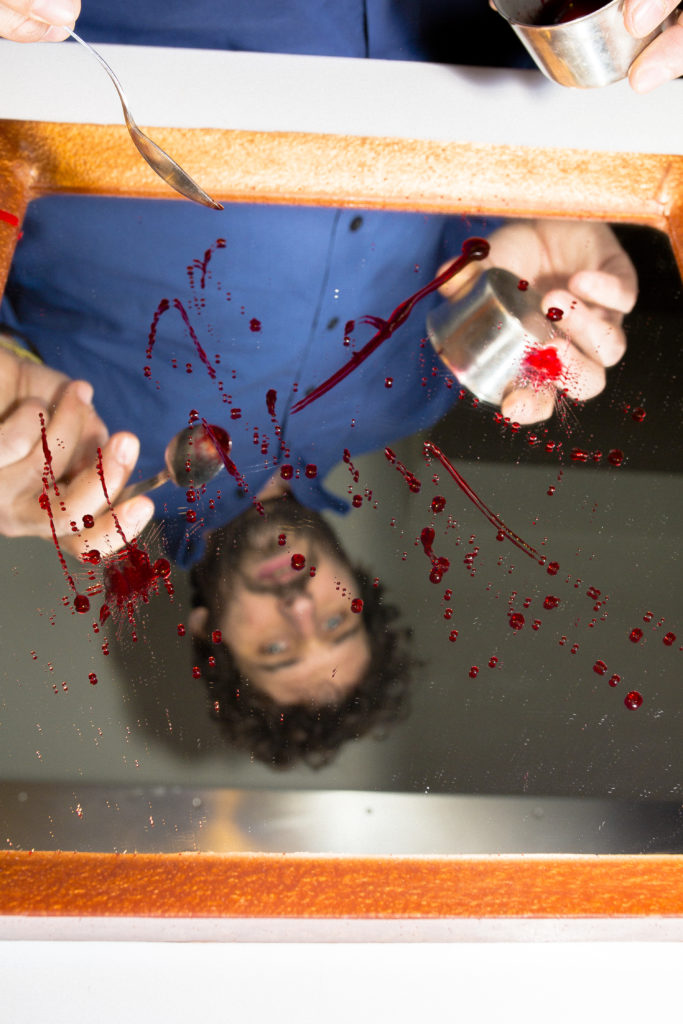 Wakapedia: Are you aware you are one of the first chefs to be interviewed by Wakapedia? Now we are giving it one more shot, because you’re good … and manzo! (literally ‘beef’ in Italian, here used as ‘stud muffin’ – ed.). Haha, jokes aside (to a certain extent): we decided to see you again to talk about your restaurant, Contraste. Or better, about both your restaurants, as you have recently opened a second called Exit.

M.P: I’ll tell you all you want to know but please, don’t call me manzo… it does sound awful! To be honest, back then I wanted to go to France. Since the very beginning of my career my dream was to work in the birthplace of haute cuisine, discover the culinary secrets of the greatest chefs… But at the time, with no real network or support, it was everything but easy. In Uruguay it was not very “fashionable” to be a chef and, despite being a good one, I didn’t know anyone who could hook me up. Yet I didn’t despair, I knew that one way or another I would make it. As it turns out, it wasn’t long before I had the chance to leave for Italy. I did not need to think twice about it and just set off!

Wakapedia: You did well! We are happy to have welcomed such a piece of m … that is, of chef! Your restaurants exude a great deal of creative flair.. Where does this imagination of yours come from?

MP: In my personal experience, the creative process comes above all out of curiosity; and curiosity comes alongside doubts, fears, uncertainties … a pinch of tension and anxiety are fundamental driving forces for experimentation, as they push you to overcome your limits. First and foremost, when approaching a recipe I always go back to the basics, that is: when I wish to revisit a recipe, I study the ingredients, the products and their origins, the memory of the taste associated with it. A recipe must be understood and respected, before revisiting it.

Wakapedia: The memory of the taste associated with it… what a beautiful expression! It reminds us of the metaphor of the madeleine (French traditional small cake – ed.) described by Proust in his “In Search of Lost Time”. Are literature and art sources of inspiration for you?

M.P: Good question! I think we are living in a ‘nomadic’ period, by which I mean that we all draw inspiration from many different creative fields, be it fashion, design, art, cinema and so forth… Each one of us sets their own reference point. In my case, I draw the aesthetic inspiration for my dishes by observing my surroundings and from the desire to create original and ambivalent shapes. A lasagna could be a donut, a strawberry can become a Piedmontese tartare, a Lego brick a fruit salad, a bottle of Campari a cheesecake and so on. Despite this, I am currently thinking of stepping away from the figurative sphere. 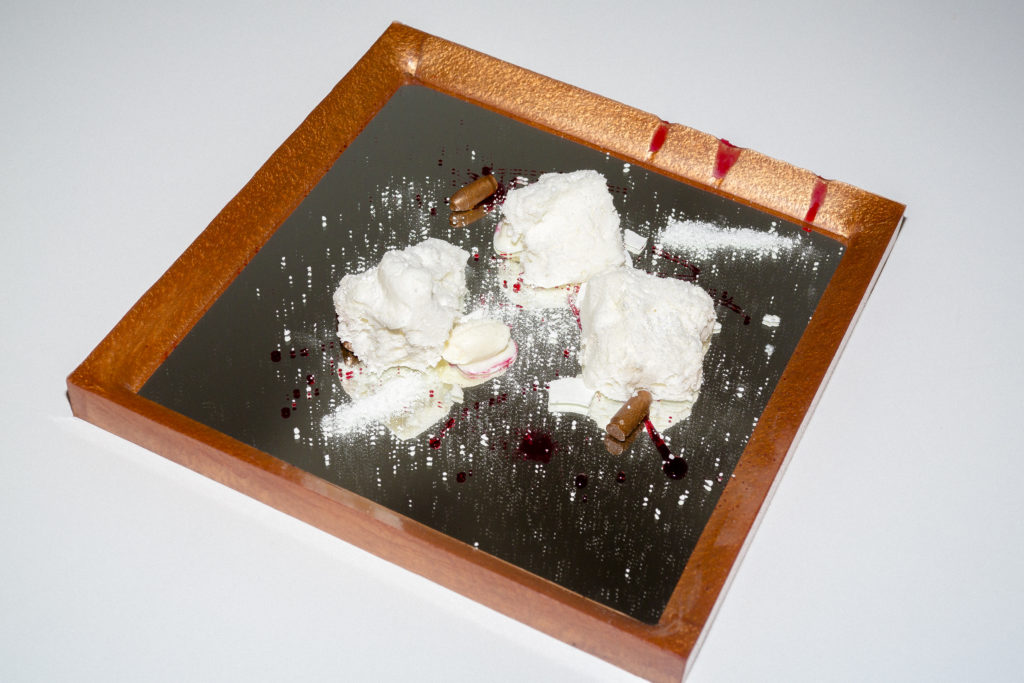 Wakapedia: How so?! Your dishes look so cute and fun! Do you want to become an abstract chef?

M.P: Haha why not, or maybe a cubist! In the first place, I do not want to jeopardize the possibility of experimenting at its fullest. Any language I decide to employ shall remain intelligible; if abstract, I do not want it to appear as a visual deception. I want the choice of textures, shapes and colours of the dishes to be linked to a flavour profile, therefore to the very essence of the ingredients my dishes are made of. In order to achieve it, I go back to where it all started – the core of the recipe, in the literal sense of the term. 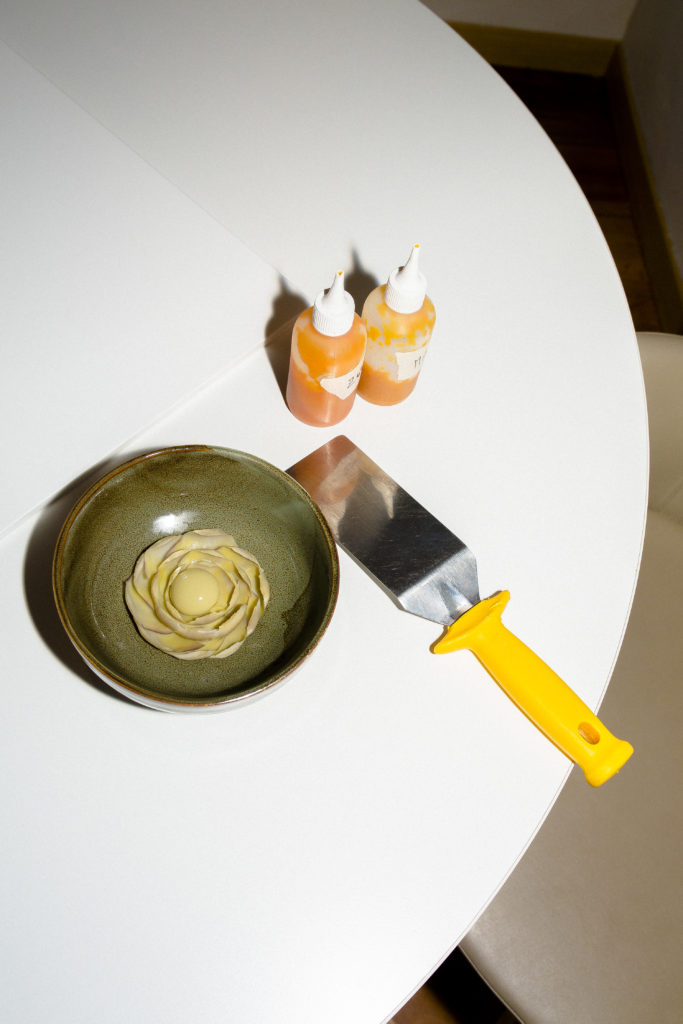 Wakapedia: Now, that’s intriguing! And how do you get there?

M.P: I observe the ingredients under a microscope, the molecular structure of a product; then; I reproduce it in my dishes, and strive for consistency in texture and flavor. With this procedure the source of aesthetic inspiration becomes the product itself. It’s a peculiar path the one I’m treading and investigating: I want it to be exclusively mine, and not inspired by something or someone else. I am not claiming it is a gastronomic revolution; it is simply the direction I am moving into right now.

Wakapedia: Am I having a conversation with Picasso or what?! But listen to me, my artist… Having already got one for Pont de Fer, when will you get a Michelin star for Contraste?

M.P: I got one this year. One day they came to the restaurant and said “Congratulations, you got a star.”

Wakapedia: Ah, apologies… We missed that one out! You’ve caught us unprepared! And when you receive this sort of accolade what do you say, thank you?

Wakapedia: How important is it for a chef to get a Michelin star?

M.P: The star is the ultimate recongition of the effort you’ve put into your work; yet, you have to understand that if there are stars that make a restaurant shine, there are also many restaurants that are not given any and still shine thanks to the energy and talent of their chefs. There’s no doubt that a Michelin star gives you great satisfaction and works as some sort of a scale for chefs; but above all, it’s an added value for customers, publicity playing a major role in influencing people’s opinion.

Wakapedia: A number of chefs have”rebelled” against the Michelin rating system. What’s your take on that?

M.P: I think a chef shouldn’t give their best for the sake of getting a star, but first and foremost because they are the engine and the soul of their restaurant. Let’s take as an example: Sèbastian Bras, the French chef who went as far as rejecting the 3 Michelin stars his restaurant had been honoured with since 1999. Too much pressure, too much media exposure… in the end, the stars were more of a nusiance than an incentive.

I sympathise with him: you should not be influenced by the number of stars you’ve been given; on the contrary, you should be the one influencing others by transmitting your enthusiasm, talent, and creativity. In order to enjoy the path you’ve chosen you need to live it fully, without necessarily aiming at this purpose. If you spend your whole career trying to get the star, you’ll lose much of the pleasure of doing your job; especially when you find that reaching that much coveted “status symbol” is often what fucks you up. Because when you have reached it you no longer live the way you did before: you’ve entered the ‘club of the grown ups’, and you have to do everything you can to remain in this safe and privileged role. Not being sure of anything is what keeps you alive. I do not want a star, or a prize, for it to affect my life: I just want to be free to choose. 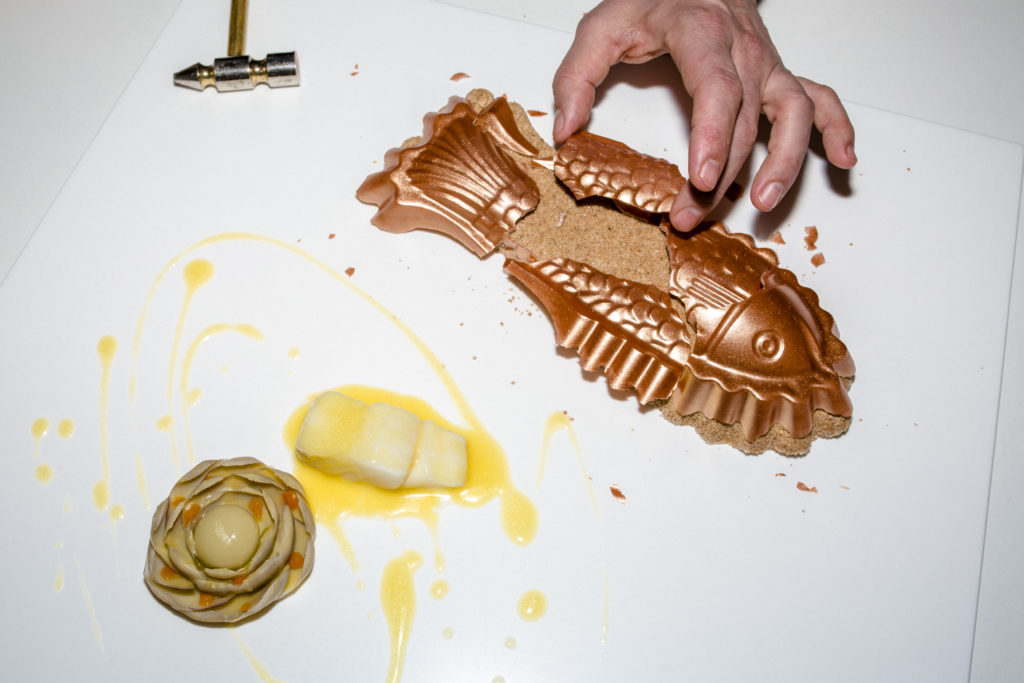 Wakapedia: So can we chuck this one in the bean?

M.P: To put it simply: for me it’s just not the target, but still something gratifying; then, if its attribution goes hand in hand with the creative path you’ve chosen, with the philosophy of your restaurant, even better. This year Contraste has won awards several times from critics, but I have only attended one ceremony. You know why? Not because I’m a snob, but because I work. And award ceremonies always happen to fall on working days.

Every time they call me it’s always the same story: “You gave me a prize for what? Because I’m a good chef. Ok, so what does a chef do? They cook; and my restaurant is open. I can’t just leave 30 people waiting to be served to collect a prize”. The only one I went to collect is called “Identità Golose – Guida ai ristoeranti d’autore”. Because the event happens to fall around Tuesday lunch time, which is the closing day of my restaurant. It’s a matter of common sense, isn’t it?

M.P: People don’t get it. I do not live for the prize, but because I like what I’m doing! For me, cooking is not a job… it’s a passion!!

Wakapedia: It would be cool if every chef had your same approach. Come on, tell us one thing: do you ever happen to question the passion you’ve been cultivating for 20 years?

M.P: Losing your passion is a real threat, unless you keep fueling it. It’s not all puppies and sunshine, there’s a good deal of commitment and sacrifice. Long story short: you can’t just enjoy every bit of it, you gotta put up with some shit, too.

Wakapedia: Gotcha. After all, we’d be lying if we were to say that good food isn’t one of our reasons for living… hold on, I’ll just rectify this one: like any good Italian, spaghetti al pomodoro is a reason for living! On this matter… can you suggest where to find the best one here in Milan? 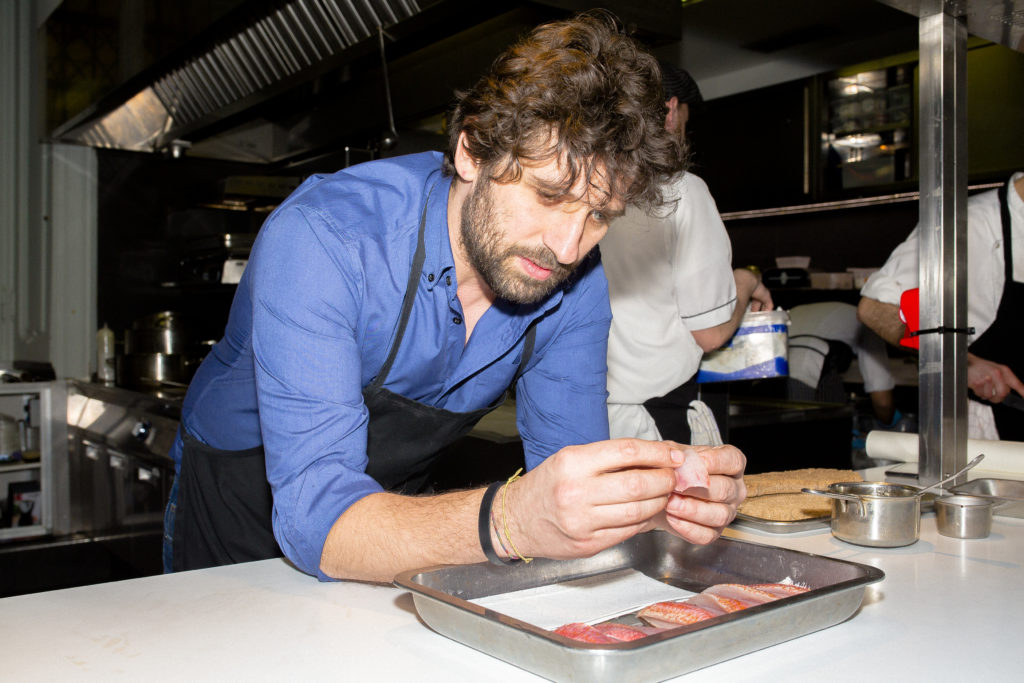