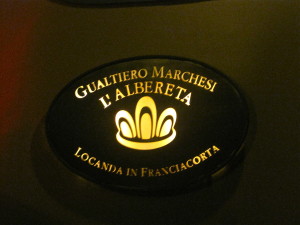 The pioneer of modern Italian cuisine Guartiero Marchesi was born in Milan in 1930, his first exposure to a kitchen being at the L’Albergo del Mercato, a hotel restaurant that his parents managed. At 17 he quit school and moved to San Moritz in Switzerland, beginning a journey of culinary study that would take him to Ledoyen in Paris, Le Chapeau Rouge in Dijon, and Troigros in Roanne. His individual and avant-garde creations garnered much attention and his first restaurant received a Michelin star within one year of opening its doors. He went on to receive the coveted 3-stars, but then made headlines by denouncing the Michelin system in 2008, thus ‘returning’ his stars. He is a founder of Euro-Toques, the association that boasts some 3000 of the world’s most famous chefs in its membership, as well as serving 2 years as its international president. He brought Rome’s oldest restaurant Ostaria dell’Orso to Paris in 2001 and he has also been selected as the Chef Ambassdor for the 2015 Milan Expo – almost in recognition that he embodies the very theme expo itself: Feeding the Planet, Energy for Life. He is the King of Italian Cuisine: he takes traditional dishes and refines them to another level, thus creating what we know as Modern Italian. 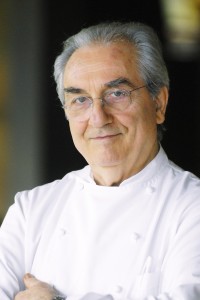 Amongst his other honours, Guartiero also holds the title of being the person SaraWaka has been most familiar with from a young age out of all the Wakapedia subject interviewees thus far. I am sure he is honoured. She still remembers her first visit to a Marchesi restaurant at the tender age of 6. The restaurant was in a hotel and had a garden filled with chickens and rabbits – a place full of fun memories for BabyWaka.

Then the meal began. A delicious meat dish. Up comes an older gentleman – it was Marchesi himself! “Hello, little girl. You see that on the plate… that is part of some of the rabbits you were just chasing around!”. She froze, wondering to herself who this nasty old man was. Then came some white meat dish. She took a bite. “This is from a pigeon we caught in front of Duomo di Milano (the cathedral)” he chimed in. Again, SaraWaka wondered who this horrible geezer was!

The second time she went with her parents, she tried his famous gold leaf Milan-style risotto for the first time. Despite her young age, BabyWaka was overcome by its taste, and blurted out – as if she was sitting at MamaWaka’s table – “Seconds please!!” This time the same old man came out and smiled: “That’s an appetite I like. The more you eat, the bigger you’ll grow!” (Strictly speaking, that part has not turned out to be true…). And out he brought another gold-leaf risotto – this time it was squid ink. BabyWaka’s eyes were opened: the old man was not some cruel fairytale villain, out to ruin kids’ fun. In fact, he was a kind godfather of a man, who even went so far as to make her a cake to celebrate her graduation from university. And what could be better than to meet him, after four long years and hear about his thoughts on art and music once again in an interview for Wakapedia. 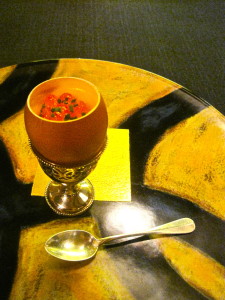 Sara Waka: Hello! Uncle Marchesi! It’s been a while. I’ve come to hear some of your grand old tales!

Guartiero: My tales? I turned 85 last week, so I hope you are seated comfortably! Us old-timers like to go on and on for a long time!

Sara Waka: Really… could I get the snack menu version rather than the full course?

Guartiero: I had the best parents. My mother was a classic lady, kind and elegant; my father a connoisseur of the arts, literature, opera and ballet. And they influenced me in so many ways. I love Einstein’s quote: the only thing that interferes with my learning is my education. You need to learn the things to learn. And I learned so much from then. Not in lectures but through experiences. But my mother made one small error: I was always good at painting, but rather than allowing me to study fine art, she sent me to a school that specialized in industrial engineering.  I dropped out, it was a disaster!

Sara Waka: Really?! I’m a dropout too! We have so much in common! 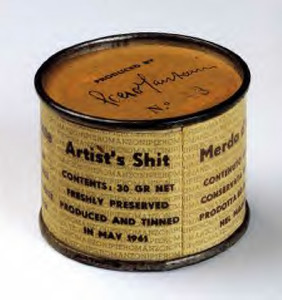 Guartiero: But, Sara, in my experience, those who struggle at school often rise to the top! Mistakes are experience and you learn a lot through them.

Guartiero: So after I dropped out, I went to a school belonging to a hotel in San Moritz. That’s where I discovered I wanted to study the hotel industry. After that, I went to a German/Suiss school in Lucerna to study languages, and also studied cuisine. I always loved the arts. Me, Pomodoro, Manzoni and Tadini often drank well until 4 o’clock in the morning back then.

Sara Waka: What!?! Pomodoro and Manzoni … the famous Italian artists??

Sara Waka: So do I!! I even went to Milan Conservatory! Only for 2 years mind… 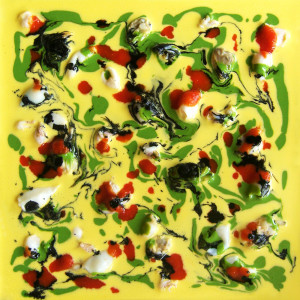 Guartiero: That was no doubt a wonderful experience, no? Unfortunately, I quit, but I still like to go to listen often. Apart from anything, my wife Antonietta is a pianist!! I’ve always loved a wide variety of the arts, but cuisine is my number one. I poured all my strength into it. Before, Haute Cuisine was only found in hotel restaurants, but since the rise of French Nouvelle Cuisine, chefs began to own their own restaurants. I apprenticed at the Mercante Hotel, surrounded by the top chefs, learning so much. And thanks to that, wonderful guests such as the directors Fellini and Visconti always came to my restaurant.

SaraWaka: Not just famous artists, but directors too! You truly are the king of Italian chefs! So, your cooking career was always based in Italy?

Guartiero: Oh no. When I was 38, wanted to study “Haute Cuisine” so took myself off to Ledoyen in Paris and Le Chapeau Rouge in Dijonne, and then to Troigros in Roanne. After gaining some experience alongside the French chef elite, I thought to myself: I am now ready. I understand the fine grains that make up great cuisine.

Sara Waka: And they are??

Guartiero: It’s how you understand the basics. For example, if you know inside out, how to adjust the heat of the flame or the steam in the pot, it’s harder to fail when preparing a dish. The great conductor Béla Bartók once said: to improvise, you must first have a great understanding of the matter at hand. And it’s the truth. To avoid mistakes, you first must have a complete understanding of what is in front of you. You being from Japan should know this well: the Japanese treat objects very well. They treat them well and use them carefully until the very end. You Japanese have a wonderful culture. years ago, a friend of mine was invited to Japan by the consulate. He called me all the way from Japan.

Sara Waka: That would be a conversation I would like to hear!

Guartiero: “Oi! Guartiero!! You’ll never guess what I am eating!? I’m eating the back bone from a 80 kilo tuna! To get to the good meat they need to hollow out the spine.” Which in itself a great knowledge of the ‘thing’. I am often surprised by you Japanese.

Sara Waka: Japanese culinary cultural is truly amazing! Banzai!! By the way, why did you return those Michelin stars that anyone else would kill for?

Guartiero: I just grew to dislike the way they do their judging. “Science is objective; cuisine is subjective” is something I believe to my core. And not just food; the art world and the music world are the same. And if you think this way, you begin to lose interest in review culture. Taste cannot be perfectly reviewed. It’s impossible. Think about it, I could make the same thing a hundred times: each time it would taste differently. And in that difference, it is delicious. Just like I am not getting old; I am just young in a different way. It’s a difference viewpoint. A different way to judge things.

Sara Waka: Well, today – in the spirit of judging things differently – I would like to award you with one Wakapedia Star for your contributions to reviving classical Italian food in an international way. Congratulations!!!

Sara Waka: Hahaha. I totally get that! As the honorable Chef Ambassdor for the 2015 Milan Expo, can I have a word or two about the Expo, Chef Guartiero Marchesi?!

Guartiero: Hmmm, I’m a little worried about it!  I know my country too well!! But, I have a lot of respect for the recent words of our Prime Minister: “We Italians must do everything, so that the world looks at our good parts!”

Sara Waka: Hahaha. A wonderful joke… I think. I for one cannot wait for the 6 months of the Expo!

Guartiero: Yeah. We need to show the world the greatness of Italian cuisine. (Note: the theme of the Expo is food!) That great French chef, Paul Bocuse, once said: “the moment the Italian chefs actually notice their own wonderful food and produce, French cuisine is done for!” I do feel we need to show the world properly how good Modern Italian food is.

Sara Waka: That does sound like something a Frenchman would say. But it’s true. Thank you so much for talking to us today! It was supposed to be a quick chat, but we’ve talked for almost 90 minutes. But I have learnt so much! So much more interesting that some old school teacher!! So the last question, as always… can I have a kiss?!

Guartiero: Of course! At my age, it’s my one pleasure in life.

Sara Waka: Hahaha. A beautiful lie, because I know you receive so many presents from artists, you could open your own gallery!

Guartiero: My own gallery… what a wonderful idea! 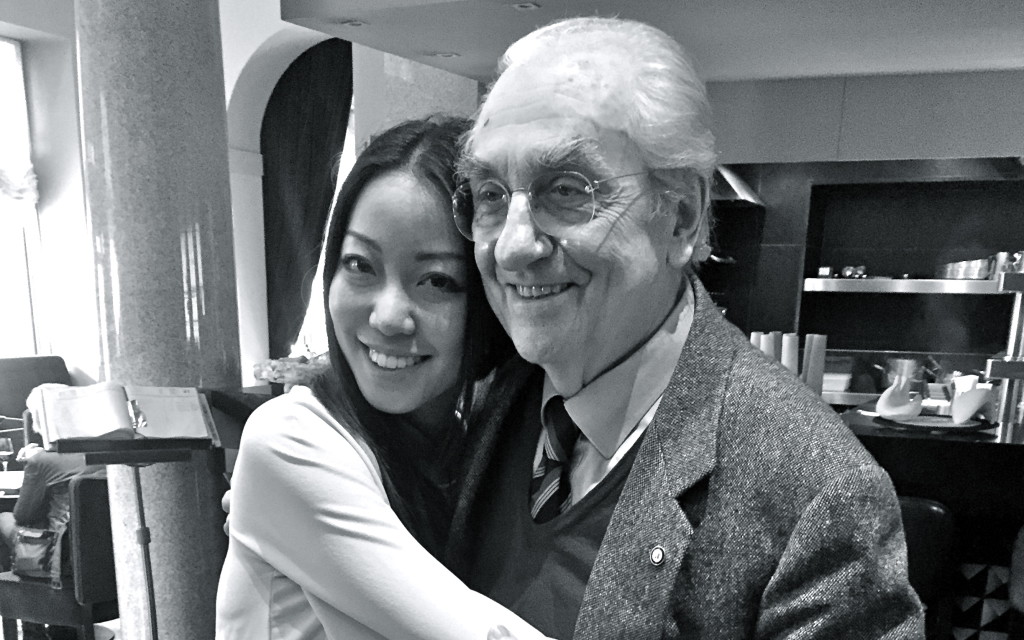