Tour at the Venice Biennale with Swatch, main sponsor 2019 – The four most exciting pavilions of this 58th edition!

This year with the Wakapedia team we had the opportunity to visit the The 58th International Art Exhibition, Venice Biennale  twice!

In May we focused on the off circuit and we talked about an art and design exhibition that particularly fascinated us at Ca ‘D’Oro (the article on Dysfunctional HERE), and in September we returned at the invitation of Swatch Italia, the main sponsor of this 58th edition of the Biennale, to enjoy the national pavilions more carefully. But you may be wondering: why is Swatch, the Swiss watch brand, sponsoring the most important international contemporary art exhibition?

Since its inception in 1983, Swatch has “flirted” with the art world, collaborating with numerous artists to create unique models and original graphics. In 2010 this desire of the brand to support contemporary artistic creation advanced to the next level when it opened the Swatch Art Peace Hotel, which is an artistic residence in the heart of Shanghai; artists from all over the world and from all disciplines are welcomed between 3 and 6 months to conceive a work of art, individual or collective, which will then enter the Swatch art collection and can be presented in exhibitions around the world.

Swatch has a space dedicated to the Venice Biennale, where it exhibits the works – very colorful and super Pop – of some artists who lived at the Art Peace Hotel. Really a good initiative that, let’s face it, made us want to send a Wakapedia candidacy to Swatch … surely, we’ll do it one day!!

But let’s talk about the Biennale again. If you have not yet visited this 58th edition, edited by the English Ralph Rugoff, you have  until November 24th.

The exhibition is divided between the Central Pavilion at the Giardini and the Arsenale which includes 79 participants from all over the world this year. The title of this edition is May You Live in Interesting Times, a somewhat enigmatic expression that can have multiple levels of reading: on the one hand, it refers to an expression of the English language long erroneously attributed to an ancient Chinese saying. This interpretation reveals one of the fil rouge of the edition, namely the impact of fake news and over-information in our lives. On the other hand, the phrase sounds like a threat rather than a wish where “interesting times” are to be understood as turbulent periods of uncertainty and crisis – economic, migratory and climatic crises – such as those we are experiencing. Let’s face it, the theme is not one of the most popular, and as you walk through the different pavilions you can perceive a rather serious atmosphere in which the proposed works induce the spectators to reflect on the contradictions and the drift of the current society.

That said, the Biennale is always a stimulating experience and there are many pavilions that have intrigued us. Four in particular really impressed us, leaving us with a vivid memory of emotion, amazement or disturbance.

So here is our very personal Wakapedia top 4 of the pavilions that excited us the most!(Warning: Do not put your heels on during the biennial visit because you will walk as if there were no tomorrow!) 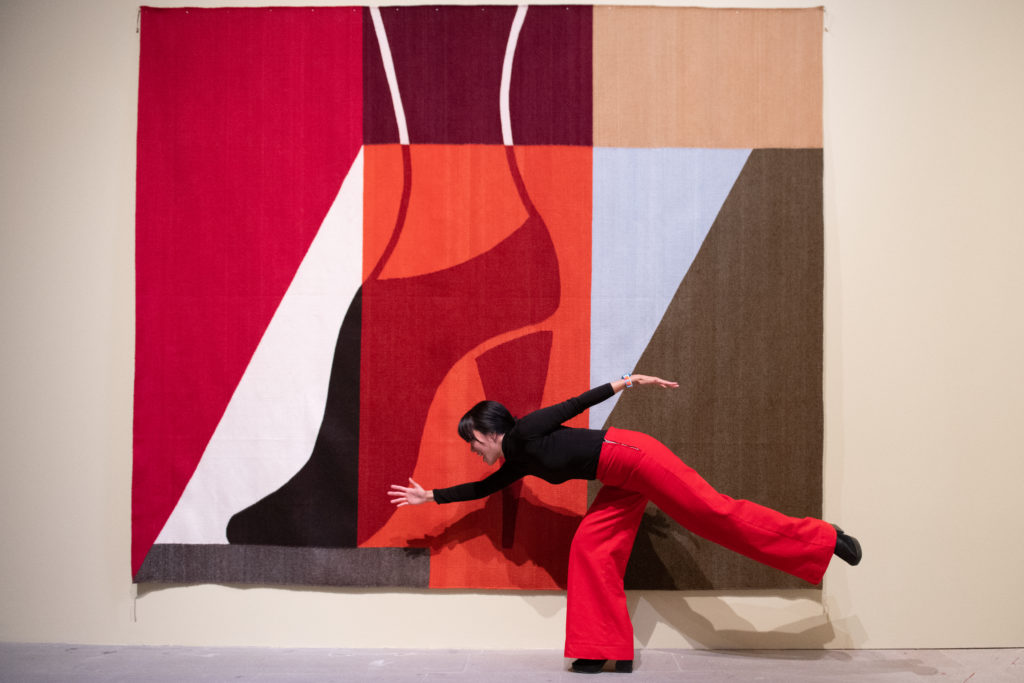 1. The emotion of a choir on the beach – Lithuanian Pavilion

The pavilion that moved us the most was undoubtedly the one in Lithuania and we should not be the only ones to think that since it was the winner of the Golden Lion for the best national participation! The work presented is Sun & Sea by the artists Lina Lapelyte, Vaiva Grainyte and Rugile Barzdžiukaitė. It is a fake beach, set up on the ground floor of a warehouse near the Arsenale, where twice a week there is an 8-hour performance that the public can see from the upper floor. Figures move on the beach like normal bathers: they play, sunbathe, take a siesta … But unlike a real beach, here in the background there are contemporary opera music on which the figurants (who we all discover are professionals  singers) sing their stories. The result is an extremely exciting choral portrait. 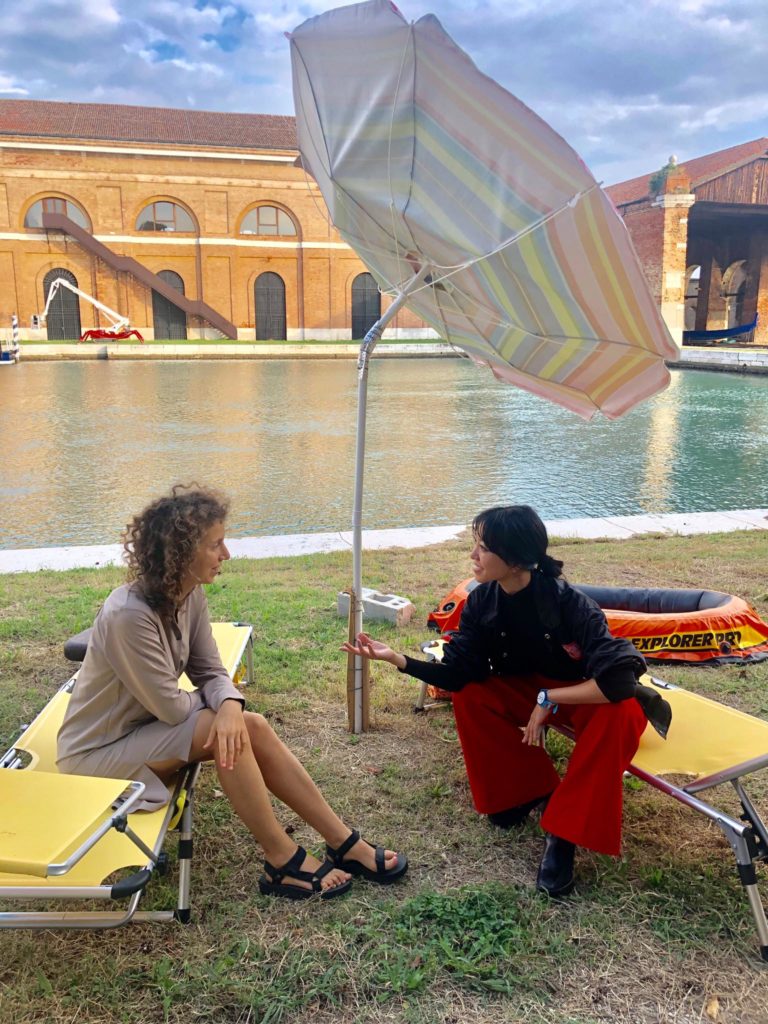 On the day of our visit, thanks to Swatch, we had the incredibly good fortune to meet one of the artists at the origin of this colossal work: the director Rugile Barzdžiukaitė. Gentle look, big smile, Rugile invites us to sit in a quiet space behind the pavilion, where two sun loungers and an umbrella turned upside down looked like an extension of the fictitious beach we had just seen in her work.

Rugile tells us that she is in Venice with her son, a 7-year-old boy who participates in the performance on the beach, singing with the figurants, playing racket and having fun as if he were really on vacation. And he got so used to it here that when he goes to a normal beach, he asks her “Mom, why don’t people sing?”

Rugile then explains the genesis of the project: “With Lina Lapelyte (composer and artist) and Vaiva Grainyte (writer and poet) we said that we wanted to do another work together after the great success of Have a good day, a theatrical performance on an international tour already a few years ago, we had a brainstorming and the initial idea was to create a performance that explored the theme of the human body, with its flaws, its weaknesses and its mortality, so we chose the beach because it is the place par excellence where the body is exposed with all its fragility, we then set about working on the lyrics of the songs, the choice of music and we decided to integrate a reflection on climate change and the ecological crisis to the performance, a another issue we have at heart, but we wanted to do it subtly and almost imperceptibly “(it is found for example in the sound of a plastic bag shaken by the wind that is heard in the background music, ed).

When we asked if they expected to win, Rugile shakes her head smiling: “We didn’t really think about winning, there was so much to do that we didn’t have the time. Being chosen to represent our country was already a victory for us, but when they announced that we had won the Golden Lion we were overwhelmed with emotion! “.

An emotion as intense as that experienced when attending this performance of 13 voices which is performed every Wednesday and Saturday, from 10 am to 6 pm. A truly unique experience, not to be missed!

Winner of the special mention by the jury, the Belgian pavilion at the 58th Biennale hosts MONDO CANE, a grotesque, disturbing and irreverent installation by Jos de Gruyter and Harald Thys curated by Anne-Claire Schmitz. The completely white space is populated by a series of automated phantoms that reproduce some characteristic human actions with unnatural movements: we recognize an artist, a baker, a grinder, a priest and an elderly lady. Each of them carries on his work with carefree stupidity, so much so that the scene seems almost a parody of a bizarre ethnographic museum. At the edge of the hall, inside cells with barriers like in prison there are the marginalized: other automata but more disturbing. To fully appreciate this installation, it is essential to read the booklet that acts as a guide: in fact, the fictitious stories of each of the characters present are told, like the musketeer without money who must interpret the role of the living statue to survive, or the centenary ventriloquist narrator of real horror stories. This work of social criticism and its imaginary stories make us reflect on how each of us is a unique being that interacts in its own way with the social codes imposed by the community. Coming out of the pavilion, it feels a bit weird, halfway between restlessness and fun … nothing better than a spritz with a view of the Canal to return to oneself and resume visits!

The Japanese pavilion proposes a reflection on the coexistence of man and nature and on the impact that human actions have on the environment. This question is of great importance for all, but in particular for the Land of the Rising Sun: an archipelago like the Japanese one is frequently struck by natural disasters, caused at the same time by nature and by man, as the explosion of the nuclear power plant of Fukushima, earthquakes, tsunamis … Entitled “Cosmo-Eggs” – with reference to the cosmogonic myths of the “cosmic egg” – the installation is the result of an 8-handed work: the artist Motoyuki Shitamichi presents images of the “tsunami boulders”, large stones of natural origin that were thrown on the Japanese beaches from the bottom of the ocean and are now in direct contact with the inhabitants of the islands, but also with colonies of migratory birds and vegetation, of which they are become the preferred habitat. The composer Taro Yasuno presents a musical creation that recreates the song of birds through a mechanical system that plays a series of wooden flutes, fed by a large orange inflatable ball, a sort of artificial “lung”. The anthropologist Toshiaki Ishikura proposes a new mythological allegory on the relationship between man and nature, created starting from local beliefs, myths and folkloristic tales of various regions of Asia on the tsunami phenomenon. Finally, the architect Fuminori Nousaku has conceived a space in which the heterogeneous contributions of the exhibition are unified in a single, shared spatial experience. 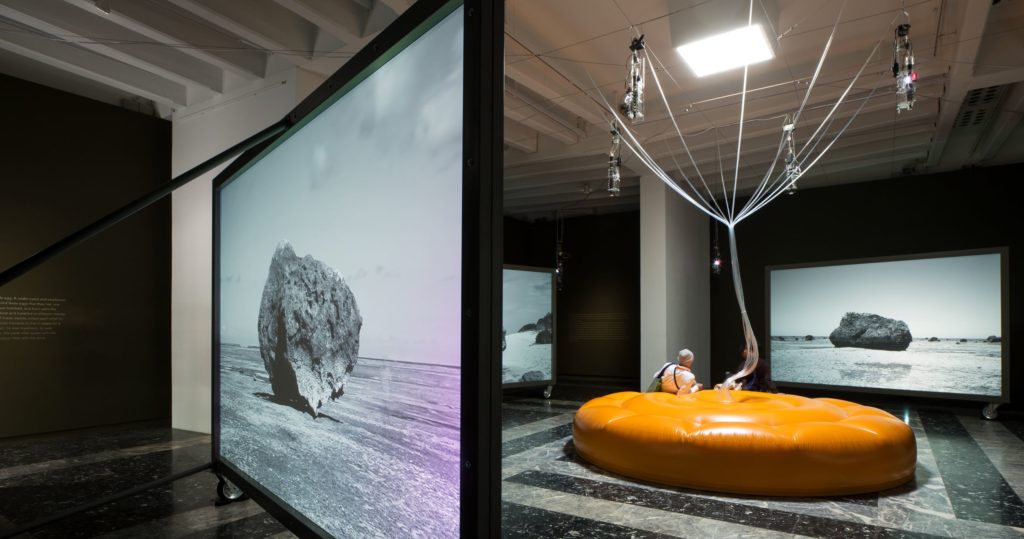 Ghana is one of the new entries in this 58th edition, as it is part of the four countries (with Madagascar, Malaysia and Pakistan) that have a national pavilion for the first time. With this first participation, Ghana surprised everyone, both critics and the public, for the quality of the proposed exhibition.

Entitled “Ghana Freedom”, the exhibition curated by Nana Oforiatta Ayim brings together the greatest contemporary Ghanaian artists to give life to a reflection on the history of the country from independence (obtained by the United Kingdom in 1957) to today. The marked geopolitical dimension of this pavilion is enhanced by an attractive scenography designed with great skill: the ocher walls forming an ellipse divided into six spaces that host the works of the invited artists. Two monumental installations open and close the path: the Ibrahim Mahama wall welcomes visitors at the entrance of the pavilion; a large curtain made with metallic elements by the artist El Anatsu – a real abstract wallpaper with bright colors – marks the exit from the exhibition. Do not miss the photographs and videos on the history of Ghana, with its spectacular landscapes from a National Geographic documentary. In short, this pavilion was a real revelation. The proof that getting off the beaten path of contemporary art can deliver excellent surprises! 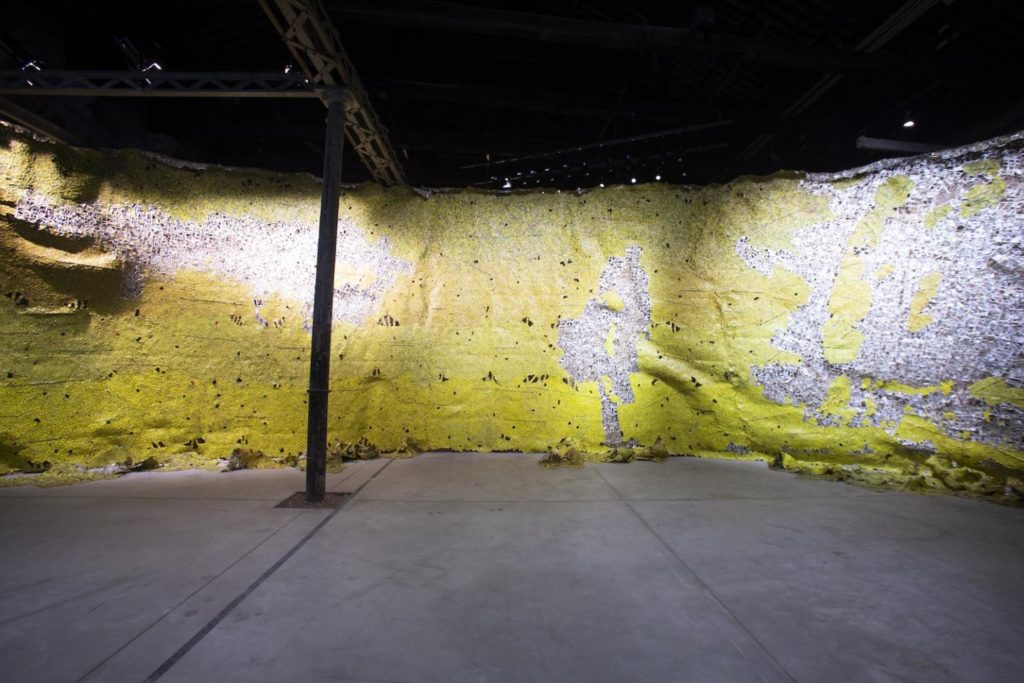