Casa Italia was the headquarters ofgli Azzurri during the Tokyo 2020 Olympic Games (July 23 to August 8, 2021). Located in the “Kihinkan — Takanawa Manor House,” a splendid Art Nouveau villa dating to the early 1900s. It is located about 10 kilometres from the Olympic Village and the Main Press Centre in the characteristic and central neighbourhood of Minato.

Casa Italia was, first and foremost, home to all the athletes on the Italian Team. It was a place for meeting, for leisure, and for celebrating medals won and records set. Also dedicated to content production, the house was a prolific media factory that allowed us to experience the stories and victories of the athletes in real time as well as understand the values of the sponsors and partners that supported the Blues on their great adventure.

The central concept of this edition of Casa Italia x Tokyo 2020 was Mirabilia. This term was inspired by the Wunderkammers of the 16th through 18th centuries: exhibition rooms where collectors made rich and non-hierarchical assemblies of art pieces and natural objects with the aim of stunning visitors visually. At Casa Italia, wonderment was inspired by every space. The architecture, art work, and one-of-a-kind design creations on display showcased and exalted the finest Italian traditions, art, and artisanal hand-crafts. Decorative and functional pieces by famous artists and designers came in quick succession in the house. Delicate Rose Chair and Getsuen armchairs, conceived by the Japanese designer Masanori Umeda for Edra, graced the lobby and celebrated Japanese Ikebana art. In Casa Italia’s restaurant, the splendid crystal Starlight tables, designed for Glas Italia by Tokujin Yoshioka (who also designed the Olympic Torch for Tokyo 2020), had the impact of an art installation.

Casa Italia was first established as a prestigious venue to receive and welcome important visitors at the Los Angeles 1984 Olympic Games. Over the years, it has evolved and grown remarkably. In Tokyo for the 2020 Olympics, it was a family home for the staff and athletes as well as a showcase for Italian excellence, in sports as well as in artistic and creative fields. 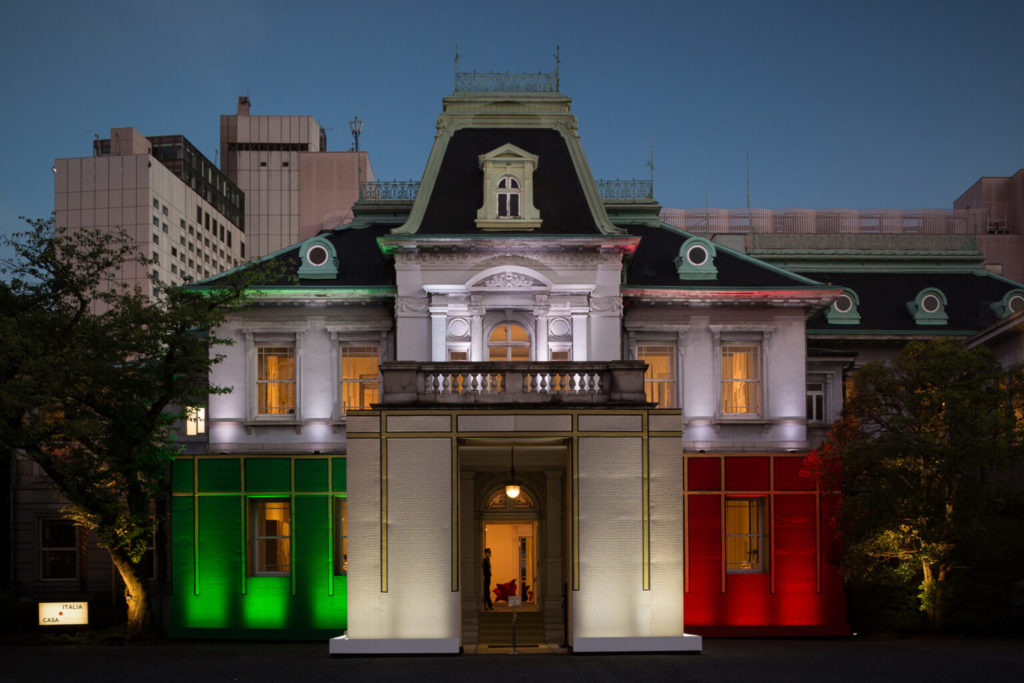 The COVID-19 pandemic made it difficult and chaotic to organise the Olympics in Tokyo this year. Cancellation was feared up to the very last moment and drastic health measures that banned clubs and parties made this year’s event positively monastic. Despite this, however, Casa Italia was an enormous success. A concentration of everything Italian in the heart of Tokyo, it was a real casa, or home, to the Italian Olympic athletes, members of CONI (the Italian National Olympic Committee), journalists, as well as many visitors (ambassadors, presidents, etc.). It was even home to the team at Wakapedia! In fact, we spent two unforgettable weeks at this Villa of Wonders, surrounded by exceptional works of art and design and by people who embody Italian talent and passion in their purest forms (it’s true; we are not bragging!).

More that just a showplace for visitors, Casa Italia was important to the athletes. It was a place they gathered and had fun after the long isolation in the Olympic Village and the stress of the competitions. On the last day of the Olympics, for example, the athletes (who tended to be very young and enthusiastic) met up to let off steam, relax and, we admit it, to get a little drunk (always in moderation of course!). There was an atmosphere similar to that on the show Big Brother, complete with gossiping, flirting, and blossoming new love. But it goes without saying we won’t name names! 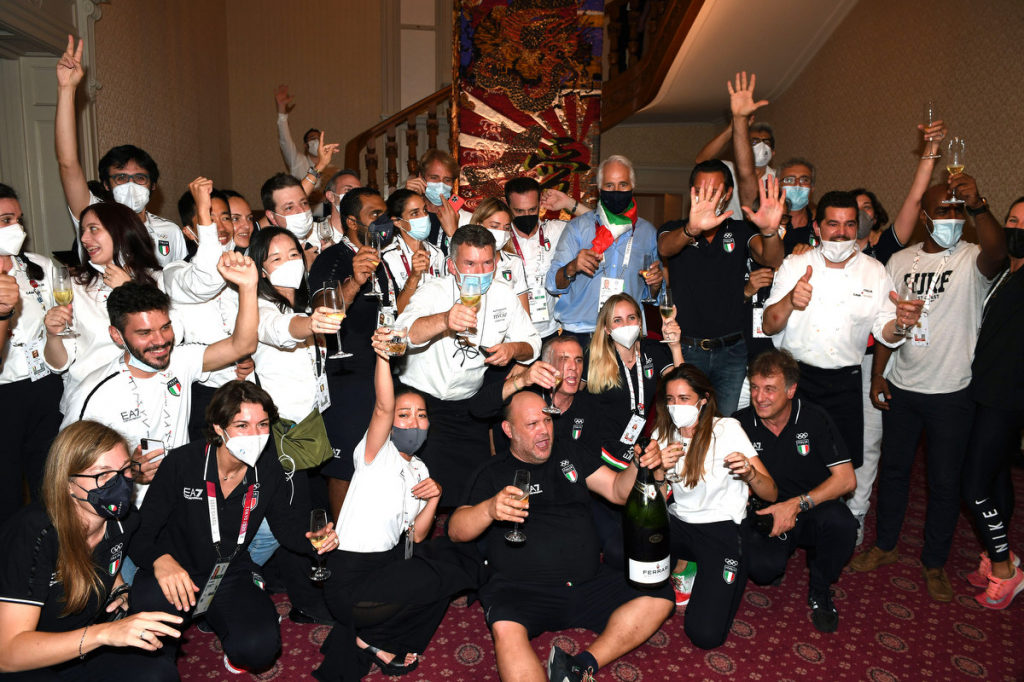 Other than having comfortable, tastefully decorated hotel rooms, Casa Italia, had a very good restaurant managed by chef Fabio Pompanin of “Al Camin” and Graziano Prest of “Tivoli,” both restaurants in Cortina. We were lucky enough to gorge ourselves there on several occasions and in fact we are still dreaming about the pasta al pomodoro! Casa Italia also had a bar, a billiard room (where we played many games at the end of the day!), an immersive room with a maxi-screen to watch the competitions and awards ceremonies (just like at an IMAX cinema!), and a press room to welcome the biggest players in Italian media. In short, the house provided an experience 100% Made In Italy. We had an amazing time filled with new meetings, friendships, and stimulating professional collaborations. We loved the Roman team (very chatty compared to us Milanese!), the fencing team, and the many athletes with whom we shared unforgettable moments. We are proud of how Italy, despite the difficulties caused by the pandemic and (complicated!) communication with the Japanese organisers, was able to build the biggest and most spectacular Olympic venue for its countrymen and women in Tokyo. In your face to all those who say that Italians are lazy! 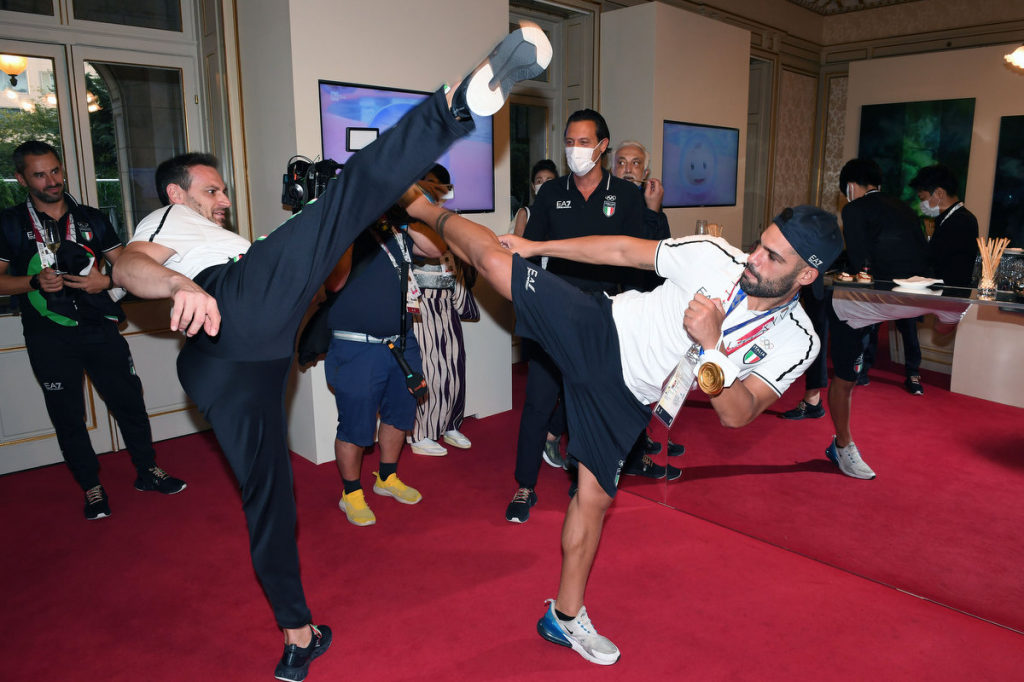 To celebrate the Italian talent taking part in the Games (but also to satisfy our art director Giulia Bison who is huge fan of surfing) we decided to interview Leonardo Fioravanti. This 23 year-old  surfer from Rome (his accent doesn’t lie!) was the first to represent Italy in this new Olympic sport. Along with skateboarding, surfing was included for the first time in the Tokyo 2020 Olympics.

Wakapedia: Hi Leo! Surfing was included in the Olympics for the first time this year. How does it feel to be the first to represent Italy in this sport?

Leonardo Fioravanti: I’m so happy, I think that the fact that surfing is at the Olympics will help the sport reach more young people and families, especially in Italy where people are obsessed with football. For each athlete, participating in the Olympics is a blessing and winning a medal is an extraordinary achievement. It was beautiful to see three surfers on the Olympic podium for the first time — even though I felt a surge of anger and disappointment because I wasn’t up there myself.  I would have loved to bring home a medal for our country, but these are the first Olympics in the history of surfing and it was still an honour for me to participate and represent Italy. In any case, I will surely be here next time to try again!

Wakapedia: We really hope so, given that you are the only Italian surfer in the Olympics, we are counting on you! When and how did you start surfing?

Leonardo Fioravanti: I started to surf in Cerveteri, a small town outside Rome, at a beach club my parents took me since I was little called Oceansurf. My older brother Matteo and I grew up in the sport with a small, close-knit group of surfers who transmitted their passion to us. Thanks to surfing, I was able to travel around the world.  It was an indescribable life-school and a dream come true!

Wakapedia: What about the cliché that Italians are bullied because they can’t surf? Is that true?

Leonardo Fioravanti: No, it’s not true. Mostly because it’s impossible to bully an Italian! (Laughter). I will say that an Italian surfer is completely different from a typical Brazilian, Australian, or American… but I was brought up in the world of surfing so I belong to a group of professional surfers at the international level. They see me as an athlete at their level, not some small-town Italian surfer.

Wakapedia: Today, your talent is world-renown, but did you ever face difficulty?

Leonardo Fioravanti: When I was 17 years old, I injured myself in Hawaii and needed about 4–6 months of recovery. I had to return to Europe to have pretty serious surgery. It was a hard period because it was my first severe injury and I couldn’t surf for 5 months. I thought I was going to go insane. But during that time, I realised how important surfing was to me. I did everything possible to get stronger and get back on the board as fast as possible. Everything happens for a reason. Without this experience, I am sure that my life would not be the same today. The accident made me stronger and made me want to push ahead and overcome obstacles to reach (and maybe even surpass) my goals.

Wakapedia: Incredible! I also had an accident that changed my plans once. Two weeks before starting to shoot an important film, I went clubbing. Let’s say that I was a bit too energetic that night, and I fell and broke my leg! I cried in the hospital bed saying to myself “It’s the end of the world!”. But I made the film anyway with the broken leg as a touch of flair! As you say, everything happens for a reason, even negative events. Anyway, I wanted to ask you how you approach a big wave without feeling fear?

Leonardo Fioravanti: The bigger the waves, the more thrilling it is! Underneath it all, I am a bit scared, but I have so much adrenaline that the fear is transformed into excitement. I really love this sensation and I like to savour it every time as if it was the first! I go crazy for it. Overcoming fear is very important in life, no? It’s essential to control your own anxiety, when you can’t avoid it.

Wakapedia: It’s true. When fear gives way to thrill and adrenaline, it allows us to overcome various difficulties in life. By the way, we are meeting in Tokyo, so here’s a question I have to ask: what do you think of Japan?

Leonardo Fioravanti: I like Japan a lot. It’s a super cool and stylish place and the food is excellent. Japanese culture is one of a kind.

Leonardo Fioravanti: Well, I have to be honest. Japanese waves are nothing special but we had good luck for the competition. “Better than nothin’” as we say in Rome! (Laughter)

Wakapedia: I heard that you travel the world in search of the best waves, from Hawaii to Biarritz, in Southwest France. Do you miss your family?

Leonardo Fioravanti:I go to Hawaii so often that it’s like my second home. And my girlfriend Sofia is there. It’s not easy to visit to my family in Rome and I miss them a lot, but I am doing what I dreamed about doing since I was little. I know how lucky I am. There is nothing better I could be doing  with my life and when I really want something, I am ready to make whatever sacrifices are necessary.

Wakapedia: When you feel lonely, remember that your are always welcome in “Casa Italia”! See you at the next Olympics! 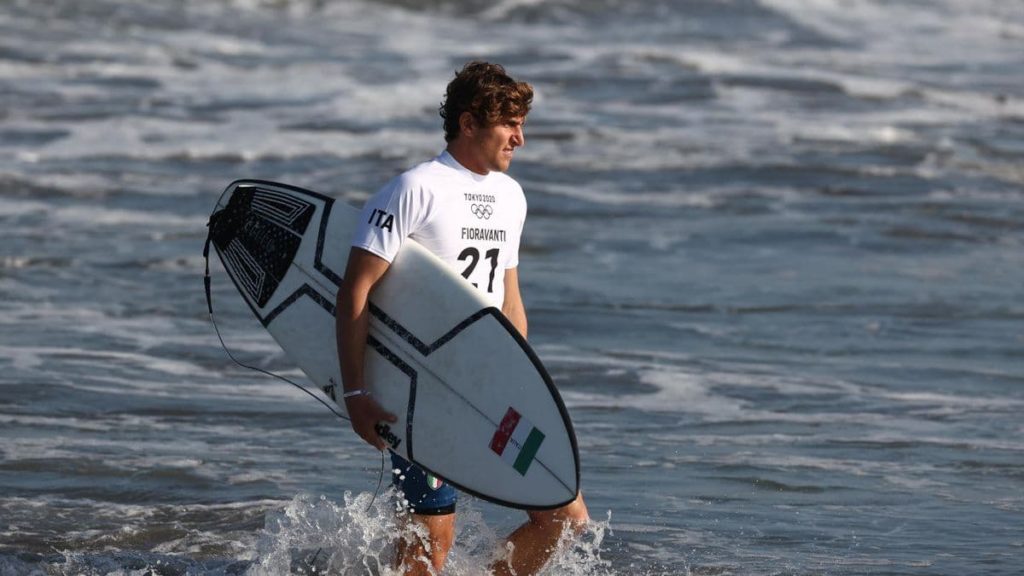