The first interviews featured on Wakapedia were with Maurizio Cattelan and Pierpaolo Ferrari; so I decided to have the opening ceremony of Wakapedia to be a make-it-yourself sushi party with the folks at Toilet Paper. The people there are fun and interesting, and I had no doubt that bringing those guys together with the Wakapedia team (not BJ though…) and making sushi would lead to interesting things. I also thought we could do it as Casa Sara Waka!)

So, without further ado, I headed down to the Toilet Paper Factory (a.k.a. their offices) and invited them one by one.

SaraWaka: Yes. Because you are always so good to us! I thought we could all make sushi together?

Seba: DIY sushi?? I’m not sure I understand, but I’ll bring some hachimaki along!
[Readers: in SaraWaka’s native tongue of Japanese, maki means to wrap: DIY sushi is maki-sushi lit: wrap-it-yourself sushi. Here, Seba has heard maki and made a mental leap to hachimaki, which is the traditional head band (or wrap) warn by Japanese warriors and festival-goers. As with all cross-language puns, the second it needs to be explained, is the second the humour is lost.]

SaraWaka: Hachimaki?? I’m not sure I understand, but it’s 8 o’clock tonight at my place.

Italians are famous for their loose time-keeping, I thought as I wondered who would turn up. Then the doorbell rang and the first guests had arrived: Seba and Maurizio.

Maurizio: What? No-one else is here…. shall we go and come back?

Seba: Maurizio, lend me a hand, would you? I’ve got all these hachimakis.

[So that’s what he was talking about: he had all these head-bands, made of paper and fixed with a stapler. That’s sooo Seba. SaraMama and SaraPapa were quite moved though.]

We had purchased some tuna, salmon, squid and octopus, and laid all the ingredients out on the ornate Japanese trays. By the way, Japanese readers: in Italy you’ll find the toro cut of tuna is the cheaper one in Italy, different to Japan…)

And just when all the set-up for the sushi-DIYing was complete, in rocked the Toilet Paper crew and Team Wakapedia.Pierre, a gentleman always, had brought three tablecloths from the Toilet Paper Seletti collaborations.

So let’s see what happened! 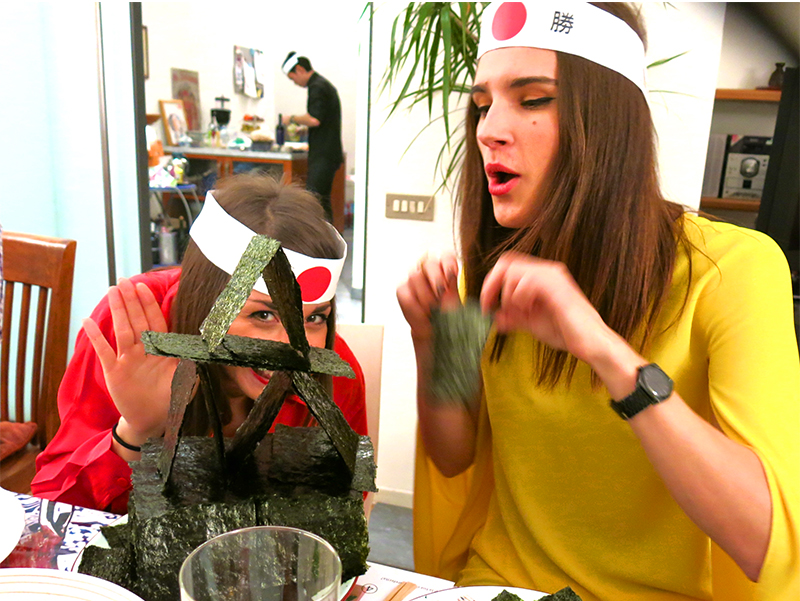 On the left we have Jinko: typical of Toilet Paper’s online producer, he’s reading SaraWaka’s instructions as he makes the sushi. The middle photo is of Marta, bravely making sushi whilst using the chopsticks as a knife and fork. On the right is noisy old Albert making sushi inspired by the Sicilian sweet Cannoli. 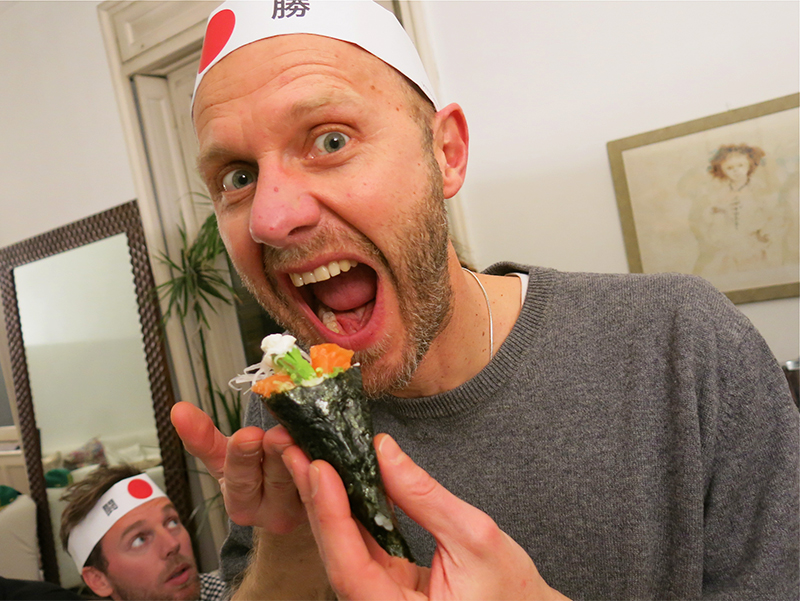 Matteo here showing no respect for the effort it took to make such a pretty little sushi roll by stuffing it down in one go. Albert there in the background looking away in disgust.

Maurizio struggled with all sushi except for the long cigar style. He should take some lessons from the talented Giulia next to him. 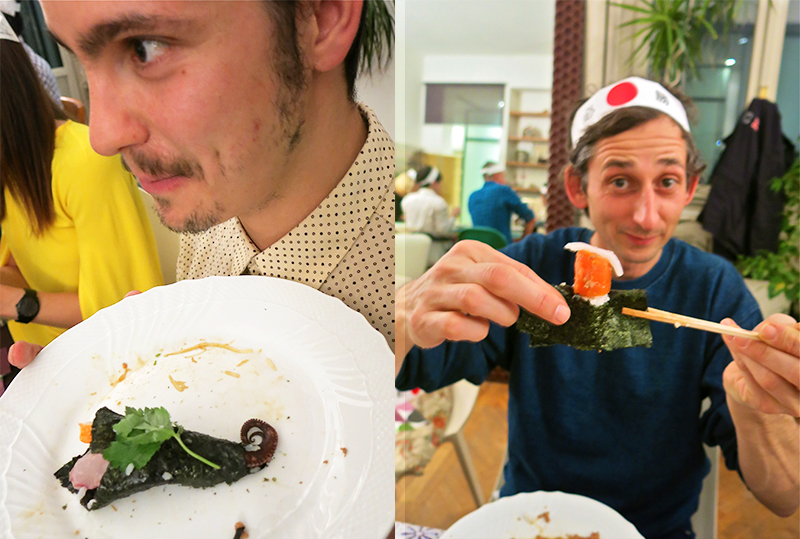 Seba and Pierre put their hearts and souls into the sushi. Seba, on the left, made a goldfish inspired roll, complete with a flick of a tail. Pierre, on the right, made what is known as a Princess Roll or Princess Maki. Both deserve massive respect for their efforts.

Team Wakapedia certainly represented themselves well too. These are new creations called the Rock-On-Roll Finger Maki and the Death-by-Chopstick Maki. 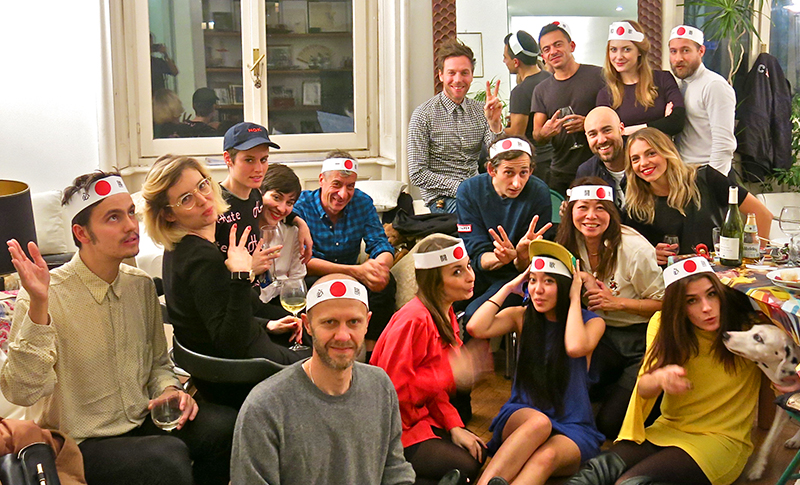 After dinner, more of SaraWaka’s friends turned up. It was an incredible DIY Sushi party, stuffed with  a wonderful mix of raw fish and creativity. Thanks to the Toilet Paper people! Wakapedia Banzai! 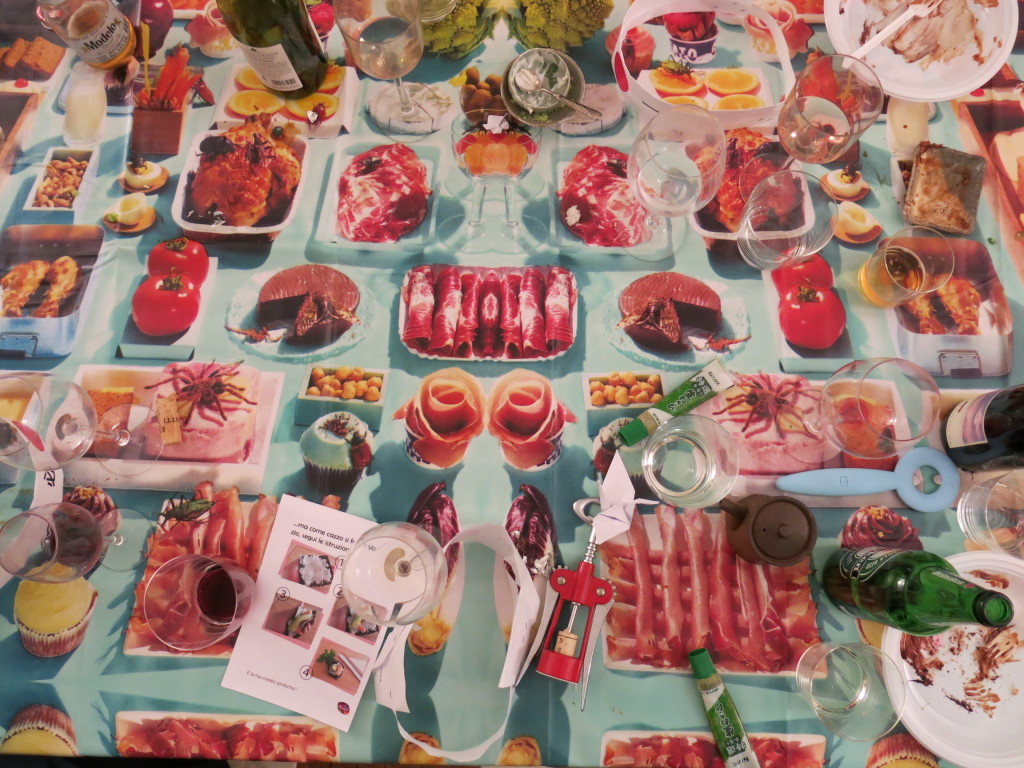 Something I noticed when doing the final clear-up! The glasses and wine bottle we used for the party matched the design of the Toilet Paper tablecloth perfectly…a bit Daniel Spoerri???