Simon Fujiwara is a contemporary artist based in Berlin. He was born in 1982 near London to an English mother and a Japanese father. His multiform works, including paintings, installations, videos, and sculptures, are displayed in prestigious museums all over the world such as the Tate Modern in London, Palais de Tokyo in Paris, MoMa in New York, and the Tokyo Opera City Art Gallery.

A mix of politics, current events, autobiographical elements, and fiction, his art challenges the common perception and stereotypes around concepts of object, product, inventionand authenticity. Among his most emblematic works are the full-scale replica of Ann Frank’s house in Amsterdam (Hope house, 2017), a series of abstract paintings based on the pigments of the facial skin of German chancellor Angela Merkel (Masks (Merkel F6.1), 2016) and the immersive installation that simulates the public’s experience at a theme park like Disneyland (Empathy, 2018).

Until September 27, 2021, Milan’s Prada Foundation presents a monographic and site-specific exhibition called “Who the Bær” that introduces a cartoon character invented by the artist. “Who” is a bear without a specific identity. They don’t have a sex, race, gender, or age; they are an image that tries to define themselfin world of other images and can transform themselfinto whatever they want or whatever they meet in the world. In this universe of extreme liberty, Who can transcend time and space, be a subject or an object, anyone and no one.

Through drawings, collages, sculpture, and animation, the artist invites the public to follow the evolutionary journey of his fictitious character as it unfolds in a large bear-shaped labyrinth. Starting from Who’s birth, marked by a simple graphic stroke, we are then witness to various happy as well as traumatic events that punctuate their existence. The story is a metaphor for the perennial search for an authentic self in a society dominated by social media and hyper-speed production and consumption of images. 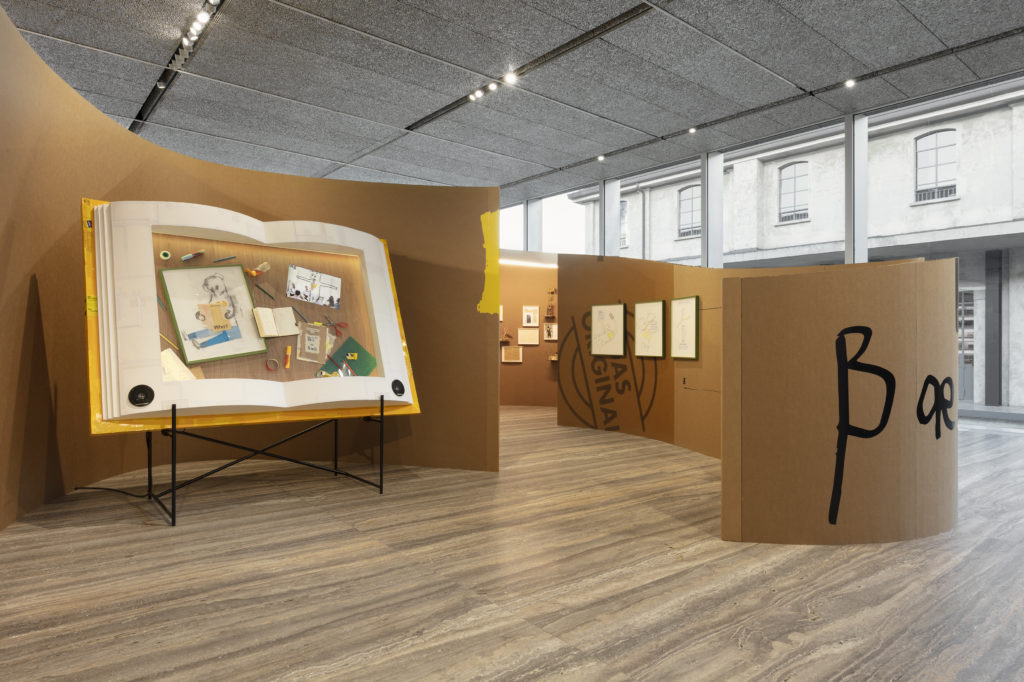 We met Simon in Milan, not long after the opening of his exhibition at the Prada Foundation. What struck us the most (besides his good looks) was his kind, sweet, gentle, and calm disposition – just like a teddy bear. Sara felt an immediate connection with him because they are both Japanese mixed with other cultures. Simon is Japanese-English and wants to obtain German citizenship because he has had it with the (Divided) Kingdom and Sara is the most Neapolitan of all the Japanese born in Milan. In this interesting interview, Simon was generous and spoke to us passionately about the eccentric and fantastic genesis of his project “Who the Bær” and how he imagines developing it in the future. A future that will surely be more than rosy for this young talent who – at less that 40 years old – already has a place in the greatest museums in the world. In conclusion, we are sure that this is only the beginning for the peaceful Simon Fujiwara and his bear. 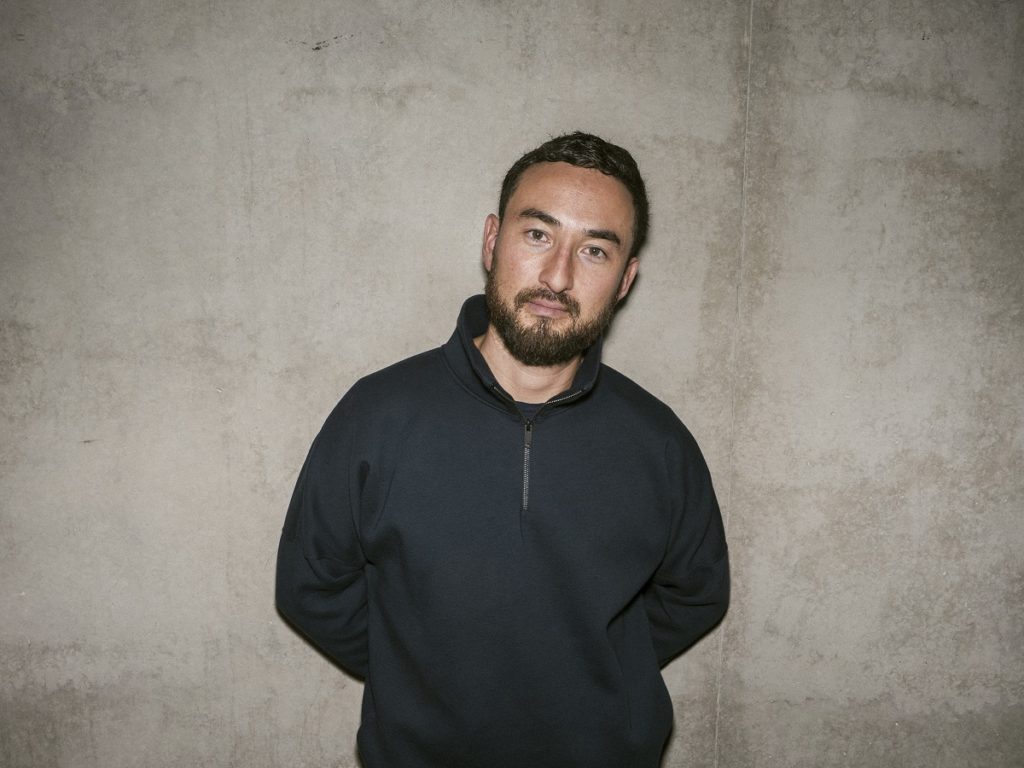 Wakapedia : Hi Simon, it’s so nice to meet you! Not only because you are a great artist, but also because we are similar: you’re Anglo-Japanese and I’m Italo-Japanese, two mutts with a double culture! Does this cause an identity crisis in you as well?

Wakapedia : How old are you?

Simon Fujiwara : Well, prepare yourself because the crisis just gets worse! (Laughter)

Wakapedia : Let’s talk about your exhibition at the Prada Foundation. I found it really interesting and moving. Being part of the life and evolution of the bear stirred up a lot of contrasting emotions in me. Can you explain the concept at the root of this project?

Simon Fujiwara : The idea of a cartoon character didn’t come to me right away. Last year, during the first lockdown, I started to make collages and to draw as a way to deal with the isolation. The only link we had to the outside world was via imagery. We were all at home, with the TV and screens on all the time. This bombardment of images, especially those linked to the Black Lives Matter movement and issues of race and gender, pushed me to reflect on and re-evaluate my positions. I wanted to create a body that could manifest all these ideas. So I started to work on a cartoon character, Who the Bær, which is halfway between a character and a symbol. A cartoon character is a being that possesses a personality and a life, but is also an object. Because it is not human, it doesn’t have to worry about how to act, how to think, and who it is. In the past there have been debates about the personalities of cartoon characters that were seen as representations of chauvinist, racist, and supremacist ideas – think of Tintin in Africa! I wanted to get away from this system and propose another vision with Who the Bær. 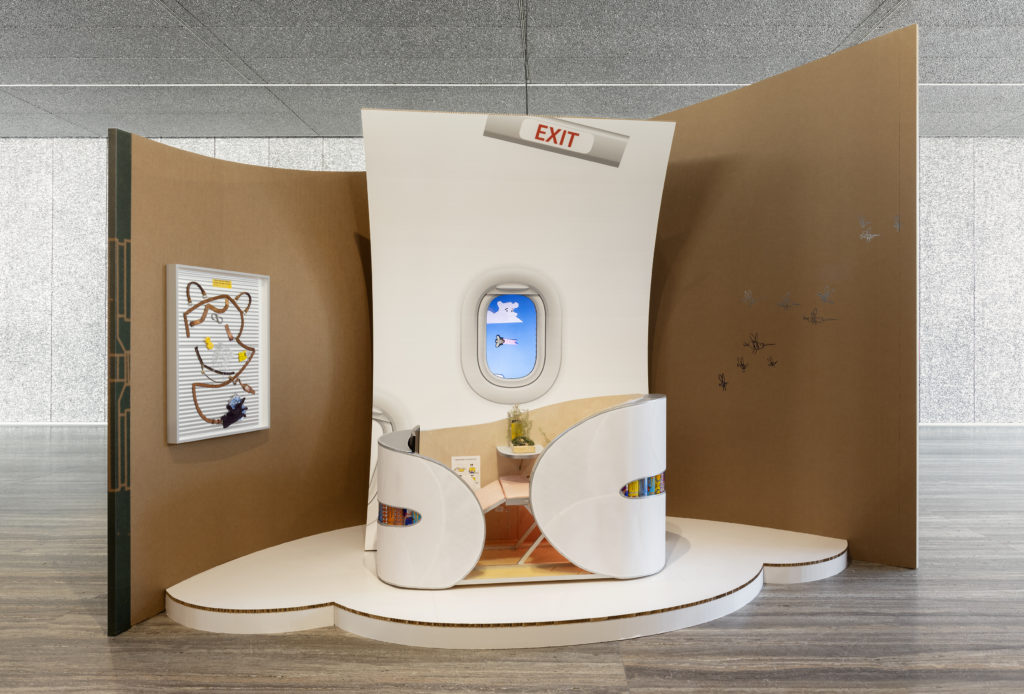 Wakapedia : Were you influenced by Japanese cartoons?

Simon Fujiwara : I really like Doraemon, so maybe the colors I chose for Who the Bær, yellow and blue, come from there. But what fascinates me the most about cartoons is the analysis of the drawings, the precise design, and the meticulous construction of character. It is a very emotional moment when you finish creating a character.

I’m interested in the relationship to an image that refers to itself, which is something important to think about nowadays. We live in an era in which entertainment, marketing, and self-promotion on social networks are extremely controlled and branded. In the exhibition, we can see a bear do all the things that we cannot do – which is cathartic! Who refers to everyone and does not exclude anyone because he doesn’t have an identity, race, age, or gender. They can be everyone or no one. This is the purview of an image.

When I started to draw, I thought about how current society obliges us to take a position and be critical about a lot of things: don’t buy this water because it is owned by a multinational corporation, don’t eat this food because it contains toxic ingredients. Everything is problematic. It’s good to be conscious, but it doesn’t leave space for freedom, for lightheartedness, or for fun, especially if you have a bit of common sense and if you are on the left. In short, fun is only for the right! So I said to myself: imagine a creature that can do everything they want to do, be everything they want to be – a car, a cookie, or Greta Thunberg – without hierarchy. I like the fact that I gave birth to a creature who is hungry for new experiences and that consumes everything without restrictions. It’s really liberating.

Wakapedia : Who is the bear? Are they you?

Simon Fujiwara : Who is more than me because I am a limited human being. The bear is an image. Therefore, they are everything and their opposite, they are whatever you want them to be.

Wakapedia : Do you think that the pandemic influenced your artistic practice? Was it a source of inspiration for you?

Simon Fujiwara : Absolutely. Without coronavirus, Who the Bær would probably not exist. Before the pandemic, I had a lot of projects in coproduction, a lot of collaborations. I traveled frequently to different countries. Then, everything stopped and I asked myself: what can I do now? I started to draw, make collages, and create hand-made objects. Many people started making banana bread or TikTok videos, I got to work on cartoons! (Laughter)

Wakapedia : Given the fact that you’re Anglo-Japanese, why aren’t there references to Japan in this project?

Simon Fujiwara : Maybe I will make a new chapter of Who the Bær in relation to Japan. This exhibition for me was like an aperitif, a first taste. The project will develop and take on new shapes in the future.

Wakapedia : That would be fantastic!

Simon Fujiwara : Who knows? Maybe the bear will become a sort of mascot for the 2022 Olympics in Japan and we will find him again in the stadium. (Laughter)

Wakapedia : Dear Simon, I can’t wait to discover what you will invent next time! 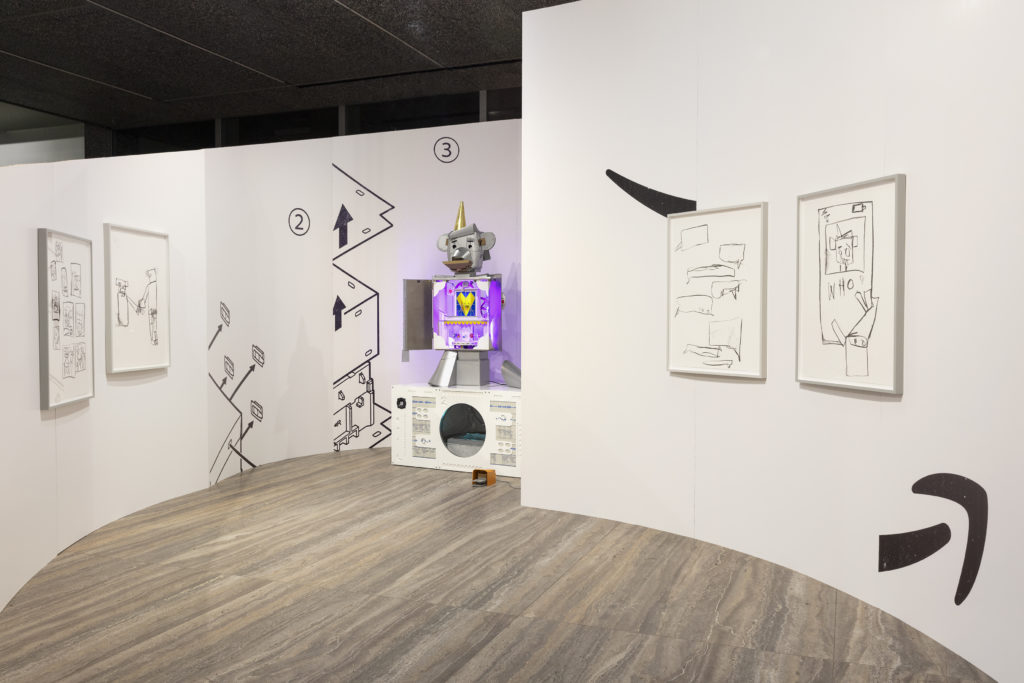