Shanghai: the new place to be for contemporary art? Three exhibitions – available to everyone – that are proof of this!

Shanghai is a megacity that sees and lives big. With its 24 million inhabitants, it is the most populous city in both China and the world. Economic capital of the People’s Republic of China, Shanghai is the main economic, financial and commercial centre of the country. But not just that…

“The Paris of the East“, Shanghai is also one of the most fashionable cities in Asia, animated by a stimulating and ever-expanding cultural scene. Every day is a succession of events, exhibitions and gallery openings. The city is full of spaces dedicated to contemporary artistic creation – from museums such as the Rockbund Art Museum and the Yuz Museum to the Moganshan Lu M50 district, a sort of Shanghai “Soho” that brings together the great community of emerging artists and talents in old industrial buildings adapted into galleries, studios, laboratories, bars and restaurants. Not to mention the spectacular Power Station of Arts – a power station converted into an exhibition centre of over 40,000 m2, which testifies to the ambition and visionary character of local cultural politics.

However the Power Station of Arts is an isolated case as it is the only project to have been funded by the government. All the others are the result of investments by great Chinese tycoons: Adrian Cheng for the K11, Dai Zhikang for the Shanghai Himalayas Museum, Liu Yiqian for the Long Museum.

The profile of Chinese “nouveaux riches” is increasingly linked to contemporary art, as evidenced by the recent sales boom in auction houses such as Christie’s and Sotheby’s. Art is seen as a profitable investment, a tool for self-promotion, a brand reputation operation. But beyond the logic of the market, contemporary art in Shanghai has become a real fashion that attracts millions of Chinese and foreign tourists from all over the world every year.

Futuristic spaces, six-figure budgets, ambitious projects and exhibitions designed to amaze… Will Shanghai be the new capital of contemporary art? It is difficult to say with certainty, but in any case it has become an obligatory stop for both art lovers and the merely curious in search of eccentric and surprising exhibitions. Proof? Here are three exhibitions accessible to all that testify that Shanghai is the new place to be for contemporary art. 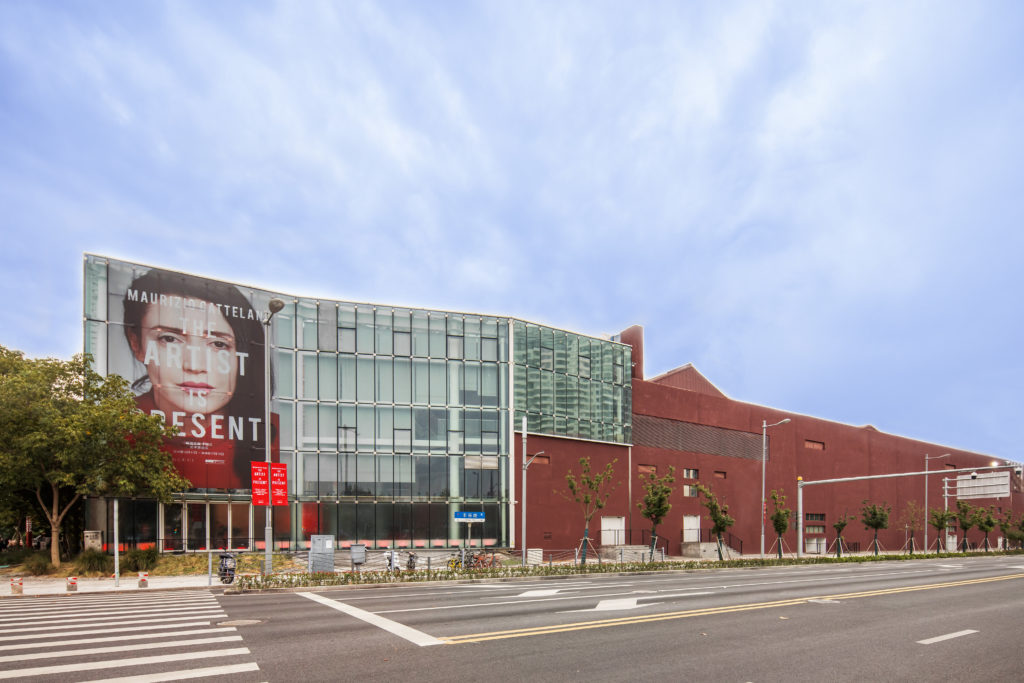 “The artist is present”: the irony of Maurizio Cattelan at the Yuz Museum

From 11thOctober to 16thDecember 2018, the Yuz Museum in Shanghai hosted “The Artist is Present“, an exhibition curated by the Italian artist Maurizio Cattelan, in collaboration with the creative director of the Gucci fashion house, Alessandro Michele.

The exhibition, whose title refers to the famous performance by Marina Abramović at the MoMA in New York, brought together over thirty artists from around the world whose works analyse the concepts of imitation, authorship and copying in the art world as a “paradigm of global culture”. With the choice of the title, even the poster was openly inspired by Marina Abramović‘s eponymous performance, but with tongue in cheek: in the gigantography selected to announce the opening of the exhibition in Shanghai, the face of the Serbian artist is replaced by that of another woman who resembles her. Plagiarism? Copy? Or trick to demonstrate how copying can be considered a noble act of creation, characterised by the same artistic value of the original? The debate is open, as always when it comes to Maurizio Cattelan who, true to himself, has sarcastically chosen to present an exhibition on counterfeiting in China. From a reproduction of the Sistine Chapel to a Gucci bag made of Lego, the playful, colourful and instagrammable works have entertained thousands of visitors. Even Asian bloggers and fashionistas, attracted by the name of the famous Gucci brand, have flocked to have a taste of the incredible world of contemporary art. 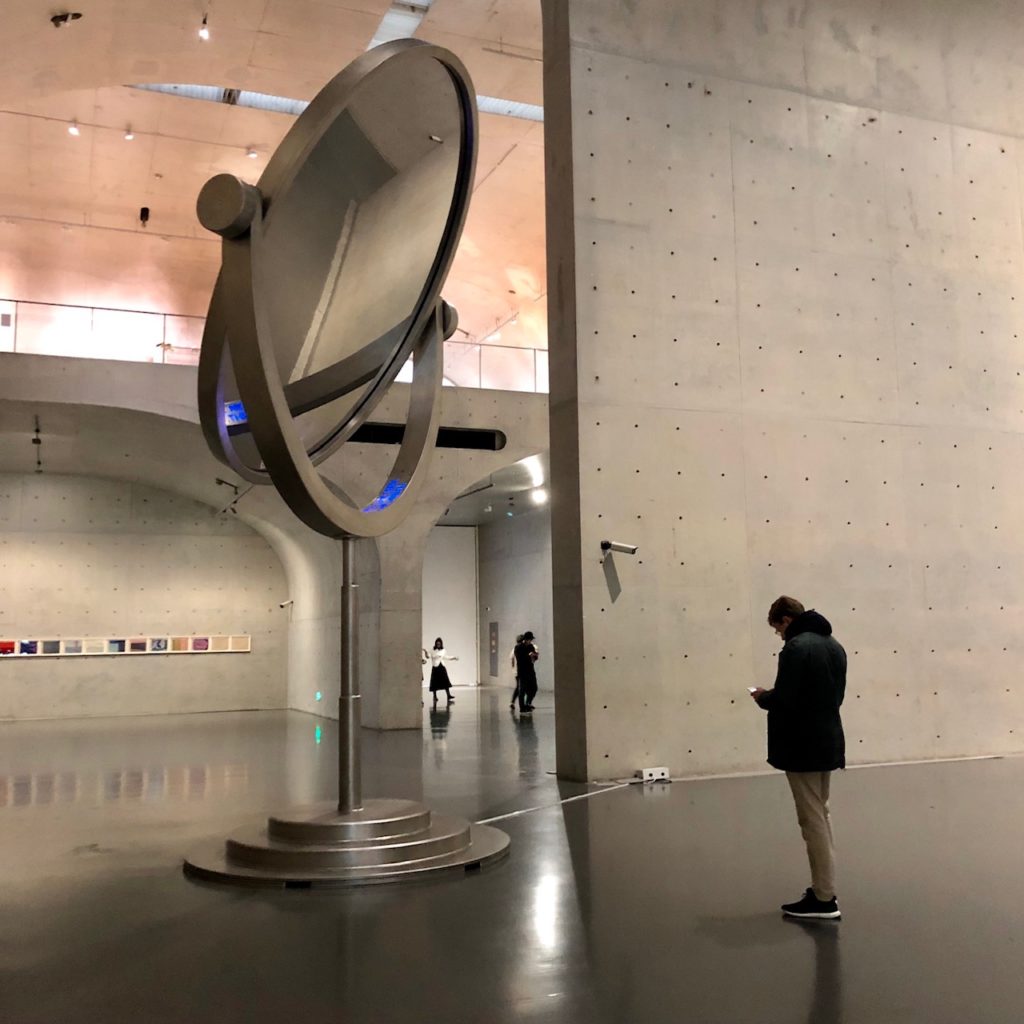 “The Eternal Thread”: Louise Bourgeois, between emotion and reflection, at the Long Museum West Bund

On show until February 24th2019 in the spectacular Long Museum building in Shanghai, “The Eternal Thread“ is the first major monographic exhibition in China dedicated to the French-American artist Louise Bourgeois. The exhibition offers a complete overview of the artist’s most famous works that deal in depth and often autobiographically with themes such as sexuality, family and loneliness, or the condition of the female wife-mother. Among the spectacular installations on display we mention “Maman“, a giant steel spider from the “Spiders” series that the artist dedicates to her mother, a weaver and restorer of ancient tapestries. It has previously been exhibited in the Turbine Hall of the Tate Modern in London. As indicated by the title, the themes of threading and weaving are central to the production of Louise Bourgeois. Needle and thread, which tradition associates with female domestic work, become symbols of reconciliation, weapons against the demons of separation, and abandonment in the hands of the artist. Sometimes they represent a metaphor for the repair of past wounds, sometimes a transfiguration of the umbilical cord that unites mother and child. In her suspended sculptures, the thread is also a symbol of the fragility of existence… In Shanghai, the most gigantic and spectacular installations by Louise Bourgeois are flanked by smaller and more disturbing works. An exciting exhibition that reminds us that contemporary art can – and must – lead to profound reflections on today’s society and our way of life. 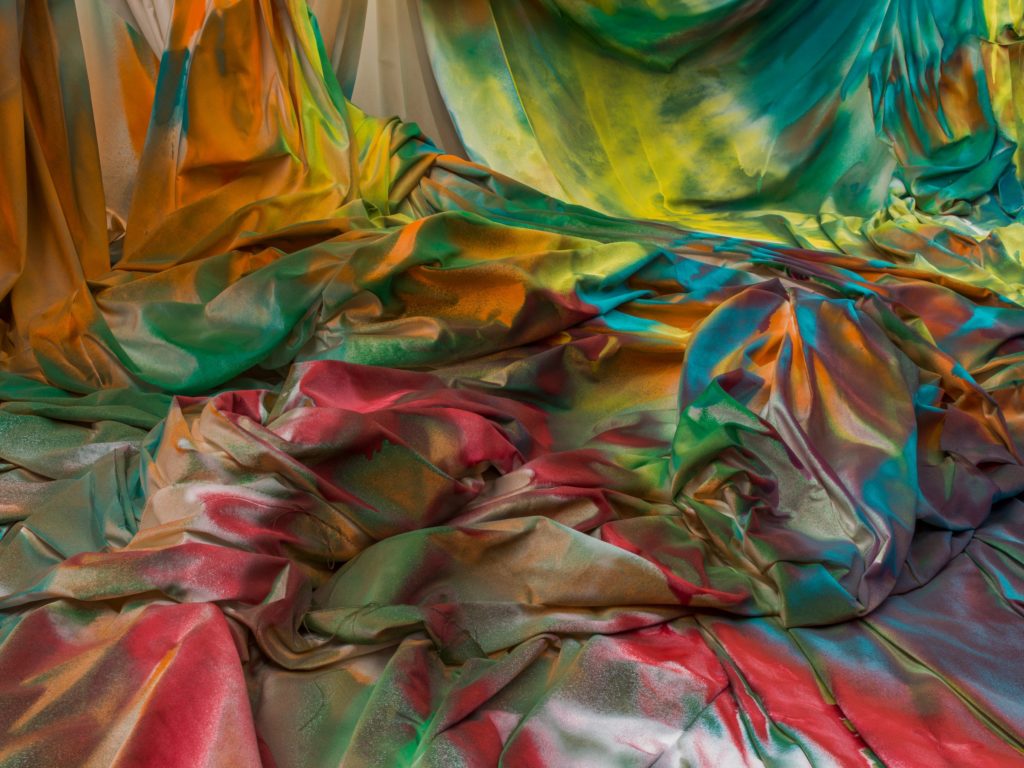 “Mumbling Mud” is the first solo show in China by Katharina Grosse, a German artist who uses a spray can as her brush. From museum walls to tree trunks, Katharina Grosse “invaded” a multitude of unconventional surfaces with her colours to create site-specific works of art. Open until February 24th2019, the exhibition is divided into five sections and invites visitors to get lost in a colourful, immersive and psychedelic labyrinth. As soon as you enter, you find yourself catapulted into a space full of building materials and piles of earth covered by a layer of multi-coloured paint. Visitors are then invited to wander through the halls, following the traces of colour left by the artist during the creation of the installations through the museum. In a later section, large pieces of fabric hang from the ceiling. The amorphous and multi-coloured forms with which the artist covered them give the public the impression of exploring a metropolis in constant flux, whose precise contours cannot be identified.

A tribute to Shanghai, an elusive, colourful city with a thousand faces? In any case, an exhibition in which to get lost, but not to be missed!