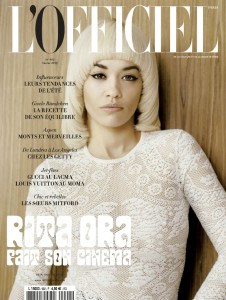 Recently, Wakapedia was asked to contribute an article to the February edition of the fabulous French magazine L’Officiel de la Couture et de la Mode de Paris. L’Officiel is one of France’s leading fashion magazines as well as being translated all over the world. Started in 1921, it’s a magazine with a huge heritage, but it is firmly embracing the modern world by… asking us to talk about online influencers! So what are you waiting for!?! Switch on the computer, crack open a beer, grab some popcorn and enjoy our article. It’s a long one but we assure you it is worth it!

When SaraWaka first opened up the oh-so popular photo-sharing social network Instagram, she was presented with a question: what does that K that follows the number stand for? Kilograms? And the occasional M that follow numbers like 2.2? Metres? Miles? Is the photo-sharer just 2.2 miles away from me? And surely I am jot the only one wondering this… She only realized the true importance of these numbers fairly recently. It’s the number of followers. K representing the THOUSANDs of followers, M being reserved for those people whose followers number in the MILLIONs. And behind these numbers and Ms and Ks lies an importance and value that some would stress is as important as the value of stocks and shares; an importance that you may not be aware of.

That the internet has revolutionized modern day communication goes without saying. Libraries are more quiet than ever, but perhaps not for the reasons librarians would like. Newspaper and magazine circulations are dropping. Young people still may not like watching the News on TV; but now they don’t need to. Information comes from the internet now, increasing the speed of communication, at once making the world a more global place. Users demand the latest information in real-time, and increasingly enjoy the process of communication with other users online. And then come Followers. The important Ms and Ks. And the key to getting these followers seems to in being able to communicate your thoughts and emotions online in the instant they occur. And with Followers, a new form of marketing communication has been born: meet the Influencers.

So what is so new about these Influencers? In the past, horrific photos of warzones came from phot-journalists bravely thrusting themselves into the action; now they are taken from people with smartphones. Newspapers delivered the news on paper following a long night of writing and revisions from their journalists; now it is a short caption and a hashtag. It is clear that smartphones – and the all-important share button – have made gaining the world’s attention a whole lot easier.

EccThese are the numbers of followers a global Influencer has, but is the true benefit of having such mammoth stats? Do these people walk around looking at their follower numbers (which tend to grow on a daily basis) feeling all smug and happy? Let’s take a closer look at this phenomenon.

Blogging is now recognized as an occupation, a career of sort, but how did these careers come about? The is no blogging school; and it’s not necessarily the case that they were already famous or had a celeb in the family (although that can help). An Influencer in my view is a person who brings together a personality that easily attracts people with their desire to have something to say. What we can see often in celebs is the ability to reach out to their fans and create a sense of trust, which then morphs into an attachment. It’s a form of love, that exists solely on the social networks. And as long as the internet doesn’t break and disappear, you will never have to worry about breaking up with that online lover.

The top Influencers, the top TOP Influencers have now surpassed fashion journalists in terms of importance. They find themselves sitting on the front rows by the catwalk, showered with gifts. New clothes, the latest collections are sent to them on a daily basis. Fan letters and love letters are commonplace – the odd marriage proposal from some unknown follower wouldn’t be so out of the ordinary. These Influencers exchange the influence they have over their followers with a living earned from famous brands. A magical spiral commences with their followers growing every time they promote the lifestyle they lead, earning them even more money and more influence. They can show themselves living the life that many of their followers would like to lead, strengthening their influence and becoming even more important to the brands. These are young stars of the social networking world. They have the X-Factor. These are the SNS Idols.

There’s no denying Louis-Marie is a good-looking chap, but a few moments with him you realize he is also intellectual and educated (seriously good job on the parenting Jean-Charles!). He claims to be deeply influenced by his father, as well as that just because he was born a gifted child of a celebrity does not mean everything was given to him on a plate. The most important thing his father gave him was a powerful creativity and dynamism, that he has brought together and made his own, into something that is unique and attractive to the circles around him. His skill is communicating powerfully with other people. “I come from Armagnac, the home of the distinct Armagnac brandy. I wanted to see, as someone brought up in the same region, if there was another way to spread the name of the brandy of my home, and came up with a new style of communicating, a cocktail of my on essence, character and inspiration,” he talked.

On the other hand, French musical whizz Cécile has a very different communication style, as anyone who knows her from her music project HollySiz can attest to: she has a powerful message delivered with power. The indie rock melodies of her latest album “My Name Is” enthralled her fans – anyone who doesn’t believe me should check out her concerts. (Oh you can’t! Because they are all sold out to her enthralled fans…). And the reason she attracts such dedicated fans is that she places great importance with communicating with them over the social networks. She enjoys the process of connecting with them, writing her thoughts and feelings, interests and views on music, almost as if she is opening up her journal with her fans.

What I felt upon meeting Louis-Marie and Cécile was that these are two Influencers who place the importance of quality of fan rather than just number of followers. Their follower number may not have hit the big M yet, but the followers they do have a deep connection with them and follow them with their hearts as well as their SNS accounts. Another characteristic of their fanbases is that they include a large number of powerful people, important industry leaders who can affect the direction of the fashion and luxury world. Their lives look very appealing to lowly people of the normal world like me (who get confused by Ks and Ms and such.) The meeting with these two Influencers led me to one conclusion: Influencers find a method of communication that works for them and then maximize it to connect with as many people as possible. They also share an a level of persuasion, like raconteurs, that suck people in to listen to what they are saying, as well as an ability to notice and communicate simple but powerful things from their daily lives, an insight into things ‘normal people’ are interested in, but fail to notice.

This article shines the spotlight on Influencers, but I also place a lot of importance on finding a method of communication that ‘works for me’ – I started me own website “Wakapedia” after all. We live in a world where we can connect with other people instantly whether by messages or social networks. Being able to share those little surprises that happen in my daily life, or those life-changing events that happen not quite a frequently or even my thoughts on a delicious meal with a picture to compensate for my poor descriptive words has slowly become something I could not imagine living without.

I long to communicate with a wide variety of people in a form without boundaries. People from the film industry to the fashions industry, people from my home in Paris to my birthplace of Italy to a small island faraway to the East called Japan where my family heritage lies. And through my communication thus far, I have noticed one thing: when it comes to Influencers, the question is not “to be or not to be”, but whether they exist to communicate or do they communicate so that they can exist. It’s an interesting question.